Items related to The Rare and Excellent History of Saladin or al-Nawadir... 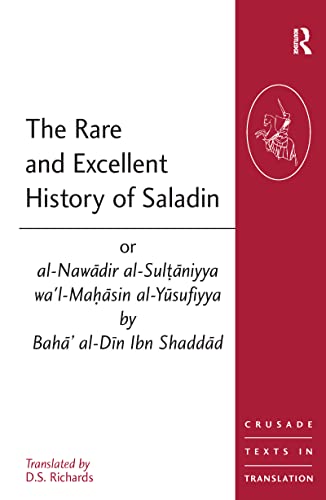 Saladin is perhaps the one and only Muslim ruler who emerges with any clarity in standard tales and histories of the Crusades; this is a translation of Baha’ al-Din Ibn Shaddad’s account of his life and career. Ibn Shaddad (1144-1234) was clearly a great admirer of Saladin and was a close associate of his, serving as his qadi al-’askar (judge of the army), from 1188 until Saladin’s death in 1193. His position and his access to information make this an authoritative and essential source for Saladin’s career, while his personal relationship with the sultan adds a sympathetic and moving element to the account of his final years. Aside from its inherent value as a source for the history of Egypt and the Middle East, it therefore provides a much-needed complement and corrective to the widely-known Latin accounts of the Crusades and the Latin Kingdom of Jerusalem in the 12th century. The present translation is based on a fuller edition of the text than that used in the previous 19th-century translation, and takes into account the translator’s readings of the earliest manuscript of the work, dated July 1228.

Translated with introduction and notes by D.S. Richards, University of Oxford, UK

'This excellent volume is essentially an English translation of Ibn Shaddad's biography... Richards is an accomplished scholar of Arabic, and he has produced a smooth and easy to read translation that rests on a solid scholarly base...will be the English language standard for the foreseeable future. While the general reader can benefit from this book, it belongs in all college and university libraries, especially those that focus on the Christian Crusades and the history of the Middle East during the Middle Ages.'
Choice

'The importance of Richards' translation lies in the fact that this crucial text of the Crusading period has now been updated and decisively improved in its English version compared with the 1897 translation, which was rather unreliable. Richards succeeds in rendering the original into an English text which is at the same time a pleasure to read and largely reliable. Compared to the patchy quality of previous translations the author is to be congratulated for this fine piece of Arabist scholarship. The translation gains in significance because it is published in the framework of the Crusade Texts in Translation series as the first Middle Eastern source, which decisively widens the breadth of this series.'
Bulletin for the School of Oriental and African Studies

'... will be of immense value to non-Arabic readers... an excellent translation of the text... invaluable to students and scholars alike: it is not just an improving and useful read, but a lively and entertaining one as well.' --Crusades

7. The Rare and Excellent History of Saladin

8. The Rare and Excellent History of Saladin being the al-Nawadir al-Sultaniyya as'l-Mahasin al-Yusufiyya of Baha' aDin Ibn Shaddad (Crusade Texts in Translation)