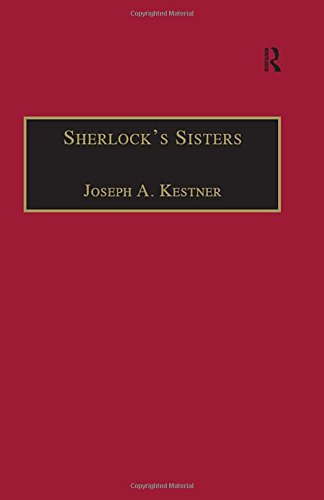 Sherlock's Sisters: The British Female Detective, 1864-1913 examines the fictional female detective in Victorian and Edwardian literature. This character, originating in the 1860s, configures a new representation of women in narratives of the nineteenth and twentieth centuries. This analysis explores female empowerment through professional unofficial or official detection, especially as this surveillance illuminates legal, moral, gendered, institutional, criminal, punitive, judicial, political, and familial practices. This book considers a range of literary texts by both female and male writers which concentrate on detection by women, particularly those which followed the creation of Sherlock Holmes by Arthur Conan Doyle in 1887. Cultural movements, such as the emergence of the New Woman, property law or suffragism, are stressed in the exploits of these resourceful investigators. These daring women deal with a range of crimes, including murder, blackmail, terrorism, forgery, theft, sexual harassment, embezzlement, fraud, impersonation and domestic violence. Privileging the exercise of reason rather than intuition, these women detectives are proto-feminist in their demonstration of women's independence. Instead of being under the law, these women transform it. Their investigations are given particular edge because many of the perpetrators of these crimes are women. Sherlock's Sisters probes many texts which, because of their rarity, have been under-researched. Writers such as Beatrice Heron-Maxwell, Emmuska Orczy, L.T. Meade, Catherine Pirkis, Fergus Hume, Grant Allen, Leonard Merrick, Marie Belloc Lowndes, George Sims, McDonnell Bodkin and Richard Marsh are here incorporated into the canon of Victorian and Edwardian literature, many for the first time. A writer such as Mary Elizabeth Braddon is reassessed through a neglected novel. The book includes works by Irish and Australian writers to present an inclusive array of British texts. Sherlock's Sisters enlarges the perception of emerging female empowerment during the nineteenth century, filling an important gap in the fields of Gender Studies, Law/Literature and Popular Culture.

'... academic but genuinely interesting...' Tangled Web UK Review '... a treasury of difficult-to-find information for those interested in the development of British female detective... the supplementary material is valuable, the bibliography extensive, and the index excellent.' Choice Review 'In Sherlock's Sisters, Kestner offers an excellent survey of the figure of the female detective as presented in late-nineteenth- and early-twentieth-century British fiction. More importantly, he shows how these stories reflect the cultural conflicts of the time... Kestner's examination of these lesser-known works is fascinating as it attests to the growing desire of women in the late-Victorian and Edwardian periods for equality.' English Literature in Transition '... Joseph Kestner now presents scholars of popular culture and women's studies with an investigation of an almost unknown subgenre: the late nineteenth- and early twentieth-century female detective novel... Kestner's work opens the door to a fascinating collection of works often dismissed by literary scholars. In Sherlock's Sisters, Kestner demonstrates that some of the most valuable insights into cultural change are found not in the 'major' texts of the period but in those written on the fringes.' Tulsa Studies in Women's Literature

Shipping: US$ 8.02
From United Kingdom to U.S.A.
Destination, rates & speeds