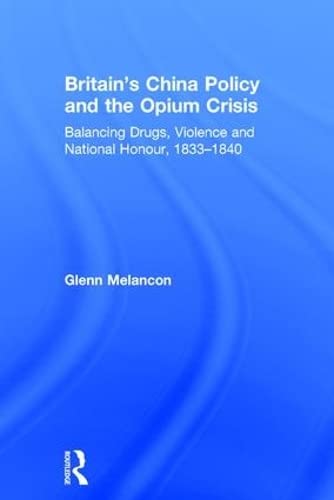 The first Opium War (1840-42) was a defining moment in Anglo-Chinese relations, and since the 1840s the histories of its origins have tended to have been straightforward narratives, which suggest that the British Cabinet turned to its military to protect opium sales and to force open the China trade. Whilst the monetary aspects of the war cannot be ignored, this book argues that economic interests should not overshadow another important aspect of British foreign policy - honour and shame. The Palmerston's government recognised that failure to act with honour generated public outrage in the form of petitions to parliament and loss of votes, and as a result was at pains to take such considerations into account when making policy. Accordingly, British Cabinet officials worried less about the danger to economic interests than the threat to their honour and the possible loss of power in Parliament. The decision to wage a drug war, however, made the government vulnerable to charges of immorality, creating the need to justify the war by claiming it was acting to protect British national honour.

'Melancon has put forward an interesting argument and successfully challenged previous interpretations that took little account of the political and wider international considerations of the British government.' The International History Review '... a fine example of empirical analysis and critical scholarship.' H-Net