Items related to Philosophy in the Roman Empire: Ethics, Politics and... 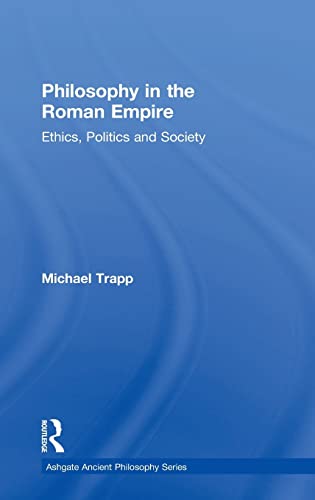 Drawing on unusually broad range of sources for this study of Imperial period philosophical thought, Michael Trapp examines the central issues of personal morality, political theory, and social organization: philosophy as the pursuit of self-improvement and happiness; the conceptualization and management of emotion; attitudes and obligations to others; ideas of the self and personhood; constitutional theory and the ruler; the constituents and working of the good community. Texts and thinkers discussed range from Alexander of Aphrodisias, Aspasius and Alcinous, via Hierocles, Seneca, Musonius, Epictetus, Plutarch and Diogenes of Oenoanda, to Dio Chrysostom, Apuleius, Lucian, Maximus of Tyre, Pythagorean pseudepigrapha, and the Tablet of Cebes. The distinctive doctrines of the individual philosophical schools are outlined, but also the range of choice that collectively they presented to the potential philosophical 'convert', and the contexts in which that choice was encountered. Finally Trapp turns his attention to the status of philosophy itself as an element of the elite culture of the period, and to the ways in which philosophical values may have posed a threat to other prevalent schemes of value; Trapp argues that the idea of 'philosophical opposition', though useful, needs to be substantially modified and extended.

Michael Trapp is Professor of Greek Literature and Thought at King's College London, UK. He has previously published an edition and a translation of the Discourses of Maximus of Tyre, and a wide range of papers on the philosophy and philosphical literature of the Imperial period. His most recent works are Greek and Latin Letters. An Anthology (CUP, 2003), and two volumes of edited papers Socrates from Antiquity to the Enlightenment and Socrates in the Nineteenth and Twentieth Centuries (both Ashgate, 2007).

'...an up-to-date, concise, nuanced analysis of the philosophical literature of the period...this book offers clear writing, anglicized transliterations, and a bio-bibliographic appendix that make it accessible...Highly recommended.' Choice 'Trapp's study of ethical thought in the continuations of the Hellenistic schools and derivative contexts provides us with a reference work of lasting value - and much food for further thought' Aestimation 'This is the most stimulating and welcome book, taking, as it does, a synoptic view of the general thrust of philosophical discourse in the period of the Roman Empire... All in all, a most refreshing and stimulating study, placing the philosophos securely in the society which he inhabited.' Sehepunkte '[Trapp] has written a most readable and challenging guide to a complex and burgeoning period in the history of ancient philosophy...' Journal of Roman Studies

1. Philosophy in the Roman Empire; Ethics, Politics and Society

2. Philosophy in the Roman Empire : Ethics, Politics and Society

3. Philosophy in the Roman Empire: Ethics, Politics and Society

4. Philosophy in the Roman Empire