Items related to Painting the Bible: Representation and Belief in Mid-Victori... 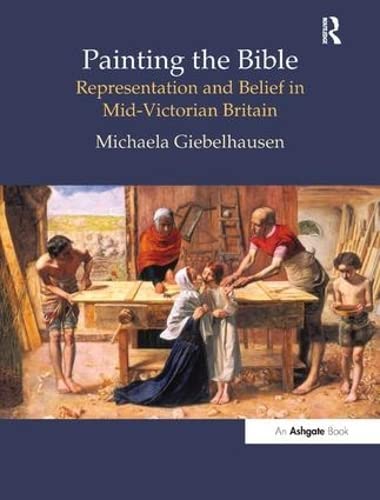 Painting the Bible is the first book to investigate the transformations that religious painting underwent in mid-Victorian England. It charts the emergence of a Protestant realist painting in a period of increasing doubt, scientific discovery and biblical criticism. The book analyzes the position of religious painting in academic discourse and assesses the important role Pre-Raphaelite work played in redefining painting for mid-Victorian audiences. This original study brings together a wide range of material from high art and popular culture. It locates the controversy over the religious works of the Pre-Raphaelite Brotherhood in debates about academicism, revivalism and caricature. It also investigates William Holman Hunt's radical, orientalist-realist approach to biblical subject matter which offered an important updating of the image of Christ that chimed with the principles of liberal Protestantism. The book will appeal to scholars and students across disciplines such as art history, literature, history and cultural studies. Its original research, rigorous analysis and accessible style will make it essential reading for anyone interested in questions of representation and belief in mid-Victorian England.

Michaela Giebelhausen is a lecturer in the Department of Art History and Theory at the University of Essex, UK.

'The book is stimulating... What sets Giebelhausen's volume favorably apart from many other treatments of Victorian biblical painting, however, is her excellent knowledge of mid-Victorian biblical criticism, which she convincingly argues deeply influenced Pre-Raphaelite painting... a much-welcomed addition to the literature and one that should provoke controversy and additional research. It is also a genuinely interdisciplinary work combining Victorian art and literary history.' Victorian Studies 'This is a richly textured, scholarly and original book, which opens up several new lines of thinking on Victorian art. It will be a great resource for both students and academics and it will be much reread.' The Art Book 'This is a book which deserves to be read, and read carefully, by all students of Victorian art, literature, and culture, and particularly by those who are fascinated ... by those rebellious and brilliant art students who formed the Pre-Raphaelite Brotherhood, and by their more academic contemporaries'. Pre-Raphaelite Studies '...[Giebelhausen] makes a powerful argument that religious painting was widely seen as the best vehicle for revitalizing ambitious contemporary art... Painting the Bible provides a succinct analysis of crucial categories that shaped the era's artistic debates about high art and religious painting... Giebelhausen's book sheds valuable light on the sociological dynamics of religious painting within the wider world of mid-Victorian art, and she demonstrates very clearly just how central religion was to the revitalization of contemporary high art in the period. This emphasis provides a stimulating challenge to a historiography that has tended to push religion to the margins of its concerns. Her work challenges scholars to link this rich sociological model to a further exploration of the multiple layers of meaning involved in religious image-making.' caa.reviews '... a rigorously researched, well-documented and highly intelligent study. ...Giebelhausen deserves our thanks for what is the first systematic attempt to engage with the theory and practice of religious painting in nineteenth century Britain.' Art and Christianity

1. Painting the Bible; Representation and Belief in Mid-Victorian Britain