Items related to Salomon and the Burneys: Private Patronage and a Public... 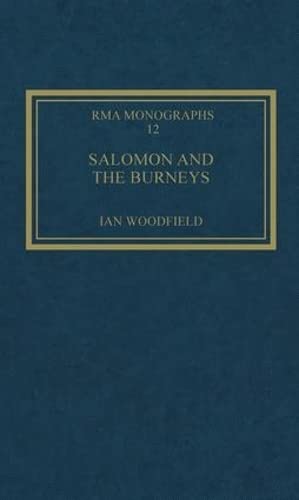 Johann Peter Salomon, the celebrated violinist and impresario, made his debut in England in March 1781. History has credited Salomon with bringing Haydn to London, yet as Ian Woodfield reveals in this monograph, Salomon's introduction of the composer to the London musical scene owed as much to luck as to skilful planning. Haydn's engagement in London proved to be a much-needed uplift to Salomon's career which, as Woodfield illustrates, had been on the wane for a number of years. In addition to its reassessment of Salomon's uneven career in London during the 1780s, this book throws light on the general relationship between public and private spheres of professional music-making at the time, and on the relationship between the social and professional attributes required of musicians if they were to be successful. Nowhere are these tensions better illustrated than in the letters and journals of the Burney family, especially those of Susan Burney, which are drawn on in the book to provide a vivid picture of the fiercely competitive musical world of eighteenth-century London.

'...what is interesting is the chance to view music-making in its social context.'
Early Music Review

'... an impressively-documented study of rivalries and reputations... This well-focused study clarifies many [...] issues, and sheds valuable light on the precarious nature of building a career in the rapidly-changing conditions of London concert life in the 1780s.'
The Musical Times

'... a remarkable fresh view of Salomon's early London career - a subject mysteriously shrouded in self-created legend - and, in so doing, unmasks two well-established myths: that Salomon's star was steadily in the ascendant during the 1780s, and that his success in enticing Haydn to London was an almost inevitable crowning achievement... This entertaining and multifaceted book is both revealing and challenging in demonstrating that the public face of London's music was the outcome of a complex series of societal negotiations in which both private music-making and amateur mediation played major roles.' --Music and Letters

2. Salomon and the Burneys: Private Patronage and a Public Career

Shipping: US$ 15.85
From United Kingdom to U.S.A.
Destination, rates & speeds

3. Salomon and the Burneys; Private Patronage and a Public Career