Items related to Assessing the Extent of China's Marketization (The... 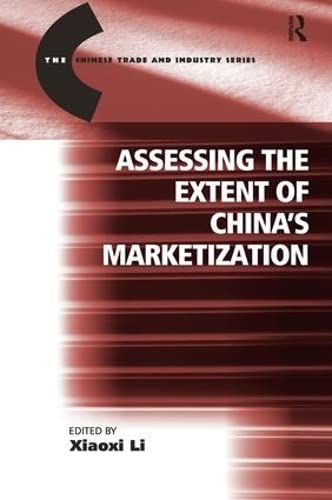 China is indisputably one of the most dynamic economic regions in the world; however the character, nature and extent of its market economy status remains in question. This book provides an empirical analysis of many aspects of the developing market economy including: government reform; the marketization of enterprises; land transactions; capital transactions and finance; the market determination of wage rates; the development of intermediary organizations; and the improvement in the economy's legal framework. China's economic growth has also brought conflict with both the EU and the US. This book examines the contentious debates such as: the extent of renminbi convertibility; the independence of the financial sector; the freedom of labour in wage-rate bargaining; the extent of foreign investment; the extent of government ownership of enterprises; the protection of property rights; and the development of company law and of corporate governance.

Xiaoxi Li is Director and Professor of the Institute of Economic and Resources Management with Beijing Normal University, China and an Invited Professor with Peking University and the Graduate School of the Chinese Academy of Social Sciences (CASS). Li has been well known as one of major advocators of China's market-oriented reforms in the 1980s as well as an authority on assessing the extent of China's marketization during recent years.

'This book documents clearly and thoroughly how far China has come in the past two decades from an old-style centrally planned economy to one where prices, wages, and production are determined by market forces. It will become a standard reference for all those interested in China's economic evolution.' Richard N. Cooper, Harvard University, USA This study provides the most comprehensive analysis available of China's transition to a market economy. It not only reviews the rising importance of the market in setting prices for goods, it explains the reforms that have supported the growing role of the market in determining wages and the price of land and more generally China's growing reliance on market-determined resource allocation.' Nicholas R. Lardy, Institute for International Economics, USA 'As China's global footprint expands, this wide-ranging and extensively documented volume will help outsiders understand how Chinese economists and policy analysts view their nation's growth process, institutional structure and reform agenda.' Thomas G. Rawski, University of Pittsburgh, USA '...this volume offers rich rewards for those seeking to identify recent changes in policies and institutions across a broad range of issues.' China Review International

1. Assessing the Extent of China's Marketization

4. Assessing the Extent of China's Marketization

5. Assessing the Extent of China's Marketization