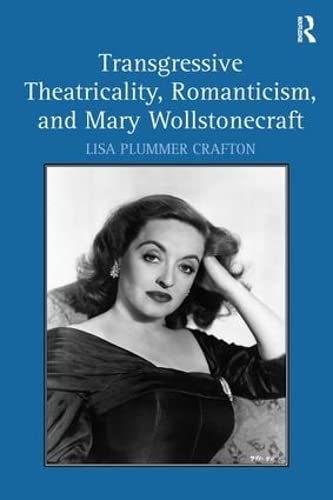 Throughout her works, Mary Wollstonecraft interrogates and represents the connected network of theater, culture, and self-representation, in what Lisa Plummer Crafton argues is a conscious appropriation of theater in its literal, cultural, and figurative dimensions. Situating Wollstonecraft within early Romantic debates about theatricality, she explores Wollstonecraft's appropriation of, immersion in, and contributions to these debates within the contexts of philosophical arguments about the utility of theater and spectacle; the political discourse of the French Revolution; juridical transcripts of treason and civil divorce trials; and the spectacle of the female actress in performance, as typified by Sarah Siddons and her compelling connections to Wollstonecraft on and off stage. As she considers Wollstonecraft's contributions to competing notions of the theatrical, from the writer's earliest literary reviews and translations through her histories, correspondence, nonfiction, and novels, Crafton traces the trajectory of Wollstonecraft's conscious appropriation of the trope and her emphasis on theatricality's transgressive potential for self-invention. Crafton's book, the first wide-ranging study of theatricality in the works of Wollstonecraft, is an important contribution to current reconsiderations of the earlier received wisdom about Romantic anti-theatricality, to historicist revisions of the performance and theory of Sarah Siddons, and to theories of spectacle and gender.

Lisa Plummer Crafton is Professor of English at the University of West Georgia, USA. She is the editor of The French Revolution Debate in English Literature and Culture and is the author of numerous articles on Wollstonecraft and Blake.

'Crafton's reconsideration of Wollstonecraft's contribution to and the influence of ideas about theatricality will make this a useful resource for scholars of both subjects, and her central argument about theatricality's potential to be both coercive and liberating deserves further attention.' New Theatre Quarterly '... the rich detail will prove to be very useful for those researching the theatrical climate of the 1790s. Wollstonecraft emerges as a theatrical writer herself who is constantly reacting to the culture of spectacle she inhabited; in this way, her multiple and varying ideas are related by Crafton to society's own complex and conflicting attitudes towards theatricality.' BARS Bulletin 'Crafton's monograph opens up a welcome space for thought within studies of Wollstonecraft, and it should be read by the serious Wollstonecraft scholar.' Modern Language Review