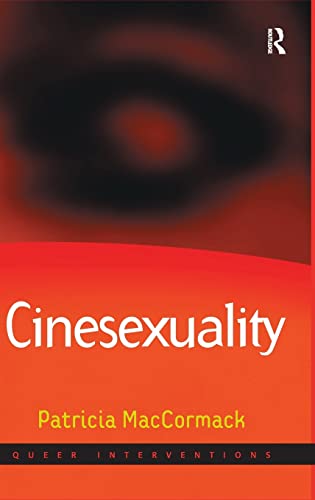 Cinesexuality explores the queerness of cinema spectatorship, arguing that cinema spectatorship represents a unique encounter of desire, pleasure and perversion beyond dialectics of subject/object and image/meaning; an extraordinary 'cinesexual' relationship, that encompasses each event of cinema spectatorship in excess of gender, hetero- or homosexuality, encouraging all spectators to challenge traditional notions of what elicits pleasure and constitutes desiring subjectivity. Through a variety of cinematic examples, including abstract film, extreme films and films which present perverse sexuality and corporeal reconfiguration, Cinesexuality encourages a radical shift to spectatorship as itself inherently queer beyond what is watched and who watches. Film as its own form of philosophy invokes spectatorship thought as an ethics of desire. Original, exciting and theoretically sophisticated - focusing on continental philosophy, particularly Guattari, Deleuze, Blanchot, Foucault, Lyotard, Irigaray and Serres - the book will be of interest to scholars and students of queer, gender and feminist studies, film and aesthetics theory, cultural studies, media and communication, post-structural theory and contemporary philosophical thought.

Patricia MacCormack is Senior Lecturer in Communication and Film at Anglia Ruskin University, Cambridge. Her principal research interests are in continental philosophy, particularly the works of Deleuze, Guattari, Irigaray, Foucault, Bataille, Lyotard and Blanchot and she has published extensively in these areas. She has also written on a diverse range of issues such as body modification, post-human ethics, performance art, monster theory and particularly Italian horror film.

'In film and cultural theory, we have lived too long in the age of signification and identification. In her brilliant and challenging book, Cinesexuality, Patricia MacCormack brings us into the era of intensity and becoming. Offering an Anti-Oedipus for image theory, MacCormack has produced a completely original approach to spectatorship as a corporeal and material distribution of desire beyond dialectics. For many readers, this will be an intensely liberating book.' D.N. Rodowick, Harvard University, USA 'MacCormack is the ultimate third millennium sexual radical: she subverts discussions about the gender of the gaze with bold insights into the ethics and the erotics of contemporary spectatorship. She swaps linguistic regimes of signification for corporeal perspectives, semiotics for affect, identifications for hybrid contagions and exemplary cases for productive anomalies. This is a wickedly clever trans-disciplinary analysis of who we are in the process of becoming.' Rosi Braidotti, Utrecht University, The Netherlands 'Cinesexualtiy, Patricia MacCormack's ambitious and avowedly experimental work on film spectatorship explores the "inherent queerness" of spectatorship. Its eight verbally and intellectually baroque chapters regard cinema less as an everyday medium of representation, and more as the space of extraordinary, multi-faceted "encounters of becoming" between spectator and image/sound, in which meanings of gender, sexuality, propriety and subjectivity are problematized.' Times Higher Education 'Cinesexuality is an interdisciplinary study that draws from the work of a diverse range of theorists including, but by no means limited to, Gilles Deleuze, Felix Guattari, Rosi Braidotti, Elizabeth Grosz, Luce Irigaray, and Jacques Derrida...It is easy to foresee the importance of this book as a defining theoretical text. Scholars of film, feminism, queer theory, post-structuralist theory and philosophy will no doubt tease out the complexities of McCormack's work throughout the coming years to discover multiple applications and possible expansions.' M/C Reviews 'With both hands wrist deep in the corpus of Continental philosophy, Patricia MacCormack's work exhibits a powerful and assured exploration of the erotic and subversive 'haptics' of spectatorship...Cinesexuality is a startling, serious and remarkable sensitive publication.' Flux 'Cinesexuality offers a brilliantly argued thesis on affectivity and the physical pleasure of cinema and although Cinesexuality maintains a deep affinity for the horror film - with references that range from Murneau through to Fulci - the tropes of gothic, grotesque and guignol serve to reveal a trenchant critique of subjectivist theories of cinema. Indeed, MacCormack's dizzying dive into conceptual philosophical thought is central to the argumentative technique. MacCormack's book is a powerful and assured exploration of the erotic and subversive haptics of spectatorship. Throughout we are offered insightful theses regarding the cinephile viewer's love and the corporeal convolutions in which the viewer finds herself.' Irish Journal of Gothic and Horror Stories