Items related to The Illustrated World Encyclopedia of Guns

The Illustrated World Encyclopedia of Guns 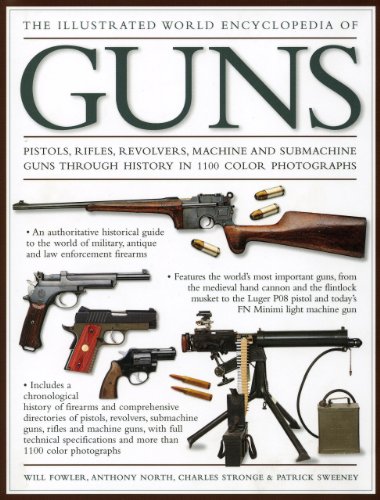 This encyclopedia explains the development of arms, and shows the specifications of modern weapons. The book introduces readers to key designers and manufacturers and the technology involved in their production. The directories are the most comprehensive reference published for the general reader. Grouped according to country of origin, each gun's features are listed, as are the military, political and technological context in which each gun was developed.

Will Fowler has worked in journalism and publishing since 1972, specializing in military history and defense technology. He is the author of over 30 books covering military technology and conflicts from the 19th century to the Second Gulf War.
Anthony North has worked for many years at the Victoria & Albert Museum, London, giving him unique access to many historic weapons. He has written and lectured on the subject of arms, armor, metalwork and antiques since the 1970s.
Charles Stronge is an experienced editor and writer who has worked for many years in the fields of politics, international affairs and military history. He also worked as an Editor for Jane's Information Group and is the author of several books.
Patrick Sweeney competes and teaches others in the use of firearms. He has written a number of books and articles, including Gunsmithing: Rifles, The Gun Digest Book of the AR-15 and Modern Law Enforcement Weapons and Tactics.

1. The Illustrated World Encyclopedia of Guns

2. The Illustrated World Encyclopedia of Guns