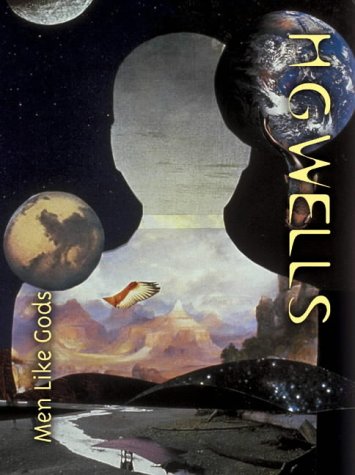 Mr Barnstaple was ever such a careful driver, careful to indicate before every manoeuvre and very much in favour of slowing down at the slightest hint of difficulty. So however could he have got the car into a skid on a bend on the Maidenhead road? When he recovered himself he was more than a little relieved to see the two cars that he had been following still merrily motoring along in front of him. It seemed that all was well – except that the scenery had changed, rather a lot. It was then that the awful truth dawned: Mr Barnstaple had been hurled into another world altogether. How would he ever survive in this supposed Utopia and, more importantly, how would he ever get back? Herbert George Wells, better known as H. G. Wells, was an English writer best known for such science fiction novels as The Time Machine, The War of the Worlds and The Invisible Man. He was a prolific writer of both fiction and non-fiction, and produced works in many different genres, including contemporary novels, history, and social commentary. Wells was an outspoken socialist and a pacifist, and his later works became increasingly political and didactic. His middle period novels (1900-1920) were more realistic; they covered lower middle class life and the ‘New Woman’ and the Suffragettes. Along with Jules Verne, Well is often referred to as “The Father of Science Fiction”

Often called the father of science fiction, British author Herbert George (H. G.) Wells literary works are notable for being some of the first titles of the science fiction genre, and include such famed titles as The Time Machine, The War of the Worlds, The Island of Doctor Moreau, and The Invisible Man. Despite being fixedly associated with science fiction, Wells wrote extensively in other genres and on many subjects, including history, society and politics, and was heavily influenced by Darwinism. His first book, Anticipations of the Reaction of Mechanical and Scientific Progress Upon Human Life and Thought, offered predictions about what technology and society would look like in the year 2000, many of which have proven accurate. Wells went on to pen over fifty novels, numerous non-fiction books, and dozens of short stories. His legacy has had an overwhelming influence on science fiction, popular culture, and even on technological and scientific innovation. Wells died in 1946 at the age of 79.

Book Description Hardback. Condition: Very Good. The book has been read, but is in excellent condition. Pages are intact and not marred by notes or highlighting. The spine remains undamaged. Seller Inventory # GOR004377740

Book Description -. Hardcover. Condition: Very Good. Men Like Gods This book is in very good condition and will be shipped within 24 hours of ordering. The cover may have some limited signs of wear but the pages are clean, intact and the spine remains undamaged. This book has clearly been well maintained and looked after thus far. Money back guarantee if you are not satisfied. See all our books here, order more than 1 book and get discounted shipping. Seller Inventory # 7719-9780755104130