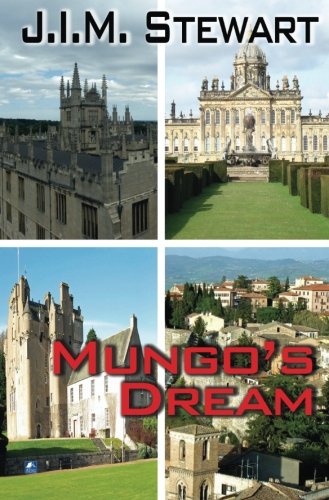 Mungo Lockhart goes up to Oxford and find himself sharing a room with the Honourable Ian Cardower, who is heir to a rich title and estate. Unimpressed by rank or riches, Mungo is nonetheless wary in his exchanges with Cardower, and this is reciprocated. However, the two do become good friends and Cardower takes Mungo on visits to his parents’ home, to visit the head of the family, Lord Audlearn at Bamberton Court – a stately home in the grand style – and then to Mallachie, the true family seat, where the eldest son Lord Brightmony lives in splendid isolation, save for his companion; Leonard Sedley, sometime novelist. All seems well, except for Mungo noticing the interest shown by the family in a young Scots boy of uncertain parentage. The story takes on an obvious twist with the usual suspicions and uncertainties mounting, lawyers being called in, and general acrimony, but the final crisis and confrontation is of a surprising nature and an unusual explanation unfolds. On the way, Stewart of course introduces sub-plots and high comedy in his usual literary style. The novel is thought provoking, teasing, and thoroughly entertaining and fascinatingly descriptive of the various locations; Oxford, Perugia in Italy, and Scotland

John Innes Mackintosh Stewart was born in Edinburgh in 1906. His father was Director of Education and as was fitting the young Stewart attended Edinburgh Academy before going up to Oriel College, Oxford where he obtained a first class degree in English. Amongst his undergraduate contemporaries were Christopher Isherwood and W.H. Auden. Stewart observed the latter during their final examinations, where Auden emerged with a third, and later stated how the "tears were coursing down his pale and ample cheeks." Stewart won the Matthew Arnold Memorial Prize and was named a Bishop Frazer's scholar. After a short interlude travelling with AJP Taylor in Austria, including studying Freudian psychoanalysis for a year, he embarked on an edition of Florio's translation of Montaigne's Essays, which secured him a post teaching English at Leeds University. In 1932, he married Margaret Hardwick, who practised medicine, and they subsequently had three sons and two daughters, one of whom is also a writer. By 1935, he had been awarded the Jury Chair at the University of Adelaide in Australia as Professor of English and had also completed his first detective novel, 'Death at the President?s Lodging', published under the pseudonym 'Michael Innes'. This was an immediate success and part of a long running series centred on 'Inspector Appleby', his primary character when writing as 'Innes'. There were almost fifty titles under the Innes banner completed during his career. Very early in his writing career, Stewart managed to establish himself as a late Golden Age Detective Story writer and as a highly cultivated and entertaining writer. In 1946, Stewart returned to the UK and spent two years at Queen's University in Belfast, before being appointed Student (Fellow and Tutor) at Christ Church, Oxford. He was later to hold the post of Reader in English Literature of Oxford University and upon his retirement was made an Emeritus Professor. Whilst never wanting to leave his beloved Oxford permanently, he did manage to fit into his busy schedule a visiting Professorship at the University of Washington and was also honoured by other Universities in the UK. Stewart wrote many works under his own name, including twenty-one fiction titles (which contained a highly acclaimed quintet entitled 'A Staircase in Surrey', centred primarily in Oxford, but with considerable forays elsewhere, especially Italy), several short story collections, and over nine learned works on the likes of Shakespeare, Kipling and Hardy. He was also a contributor to many academic publications, including a major section on modern writers for the Oxford History of English Literature. He died in 1994, the last published work being an autobiography: 'Myself and Michael Innes'. His works are greatly admired for both their wit, plots and literary quality, with the non-fiction acknowledged as being definitive.