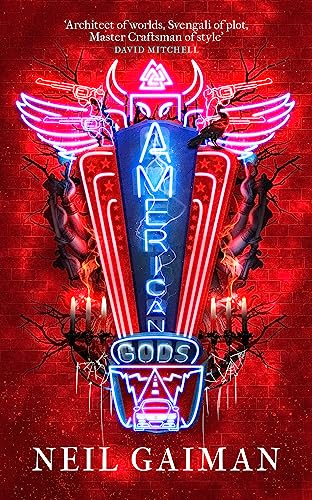 American Gods is Neil Gaiman's best and most ambitious novel yet, a scary, strange, and hallucinogenic road-trip story wrapped around a deep examination of the American spirit. Gaiman tackles everything from the onslaught of the information age to the meaning of death, but he doesn't sacrifice the razor-sharp plotting and narrative style he's been delivering since his Sandman days.

Shadow gets out of prison early when his wife is killed in a car crash. At a loss, he takes up with a mysterious character called Wednesday, who is much more than he appears. In fact, Wednesday is an old god, once known as Odin the All-father, who is roaming America rounding up his forgotten fellows in preparation for an epic battle against the upstart deities of the Internet, credit cards, television, and all that is wired. Shadow agrees to help Wednesday, and they whirl through a psycho-spiritual storm that becomes all too real in its manifestations. For instance, Shadow's dead wife Laura keeps showing up, and not just as a ghost--the difficulty of their continuing relationship is by turns grim and darkly funny, just like the rest of the book.

Armed only with some coin tricks and a sense of purpose, Shadow travels through, around, and underneath the visible surface of things, digging up all the powerful myths Americans brought with them in their journeys to this land as well as the ones that were already here. Shadow's road story is the heart of the novel, and it's here that Gaiman offers up the details that make this such a cinematic book--the distinctly American foods and diversions, the bizarre roadside attractions, the decrepit gods reduced to shell games and prostitution. "This is a bad land for Gods," says Shadow.

More than a tourist in America, but not a native, Neil Gaiman offers an outside-in and inside-out perspective on the soul and spirituality of the country--our obsessions with money and power, our jumbled religious heritage and its societal outcomes, and the millennial decisions we face about what's real and what's not. --Therese Littleton

American Gods by Neil Gaiman has won the 2001 Bram Stoker Award for Best Novel at the Horror Writers Association Annual Meeting held that was held June 7-9 in New York City.

Book Description 2004. Paperback. Condition: New. Paperback. After three years in prison, Shadow has done his time. But as the time until his release ticks away, he can feel a storm brewing. Two days before he gets out, his wife Laura dies in a myst.Shipping may be from multiple locations in the US or from the UK, depending on stock availability. 736 pages. 0.480. Seller Inventory # 9780755322817

Book Description Headline Sep 2005, 2005. Taschenbuch. Condition: Neu. Neuware - Days before his release from prison, Shadow's wife, Laura, dies in a mysterious car crash. Numbly, he makes his way back home. On the plane, he encounters the enigmatic Mr Wednesday, who claims to be a refugee from a distant war, a former god and the king of America.Together they embark on a profoundly strange journey across the heart of the USA, whilst all around them a storm of preternatural and epic proportions threatens to break. 640 pp. Englisch. Seller Inventory # 9780755322817

Book Description 2004. Paperback. Condition: New. Paperback. After three years in prison, Shadow has done his time. But as the time until his release ticks away, he can feel a storm brewing. Two days before he gets out, his wife Laura d.Shipping may be from our Sydney, NSW warehouse or from our UK or US warehouse, depending on stock availability. 736 pages. 0.480. Seller Inventory # 9780755322817