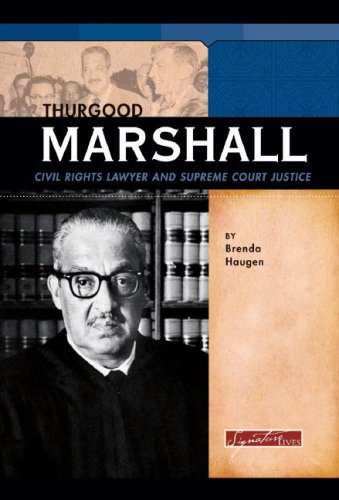 From the late 19th century into the 21st century, technological and cultural advancements transformed the world into a new and modern place. These advancements changed the way people lived, worked, and thought about themselves and the world. The combination of all these changes continues to produce what we know as the modern world. Thurgood Marshall was the first African-American named to the Supreme Court. He opposed segregation and fought for racial equality in a world of prejudice. Marshall held firmly to his beliefs of an equal America and worked hard to bring freedom, justice, equality, and respect to all people, including blacks, women, the homeless, and the mentally ill.

Brenda Haugen started in the newspaper business and had a career as an award-winning journalist before finding her niche as an author. Since then, she has written more than 50 books and edited hundreds more, most of them for children. A graduate of the University of North Dakota in Grand Forks, Brenda lives in North Dakota with her dog, Alice, who chose Brenda when she went to the Humane Society thinking she was there to adopt another dog.

Thurgood spent most of his life fighting for equal rights for African Americans. One of the greatest victories of his career was Brown v. Board of Education. As a small child he was exposed to race riots, Jim Crow laws, a segregated education, and low pay --Children's Literature Comprehensive Database Newsletter