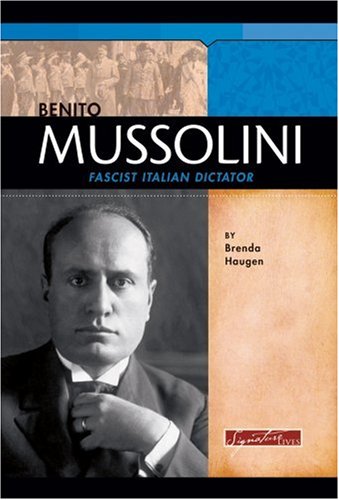 From 1900 to the present day, humanity and the world have undergone major changes. Drastic shifts in theories and practice tested the standards of personal freedoms and religious conventions as well as science, technology, and industry. The new mind-set of the modern world includes a focus on humanitarianism and the belief that a global economy has made the world a more connected place. Starting as a fascist newspaper editor in the early 1900s, Benito Mussolini rallied enough support to become prime minister of Italy in 1922. He would go on to lead Italy into World War II and befriend Adolf Hitler, the Nazi leader of Germany. Even with the help of his powerful ally, Mussolini’s war efforts would not succeed. Mussolini resigned from power and was executed by his own countrymen

Brenda Haugen started in the newspaper business and had a career as an award-winning journalist before finding her niche as an author. Since then, she has written more than 50 books and edited hundreds more, most of them for children. A graduate of the University of North Dakota in Grand Forks, Brenda lives in North Dakota with her dog, Alice, who chose Brenda when she went to the Humane Society thinking she was there to adopt another dog.