Items related to Wheel of Great Compassion: The Practice of the Prayer...

Wheel of Great Compassion: The Practice of the Prayer Wheel in Tibetan Buddhism

Wheel of Great Compassion: The Practice of the Prayer Wheel in Tibetan Buddhism 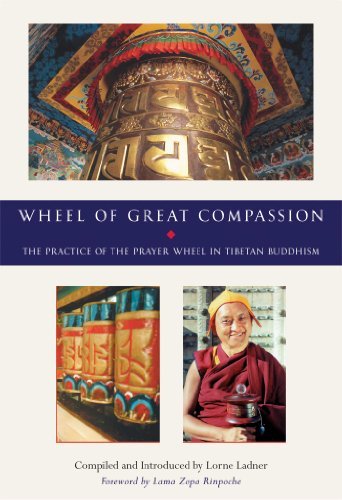 The Wheel of Great Compassion equips Western readers with everything necessary to understand the use of the prayer wheel in Tibetan Buddhist tradition. It offers translations of several seminal texts and commentaries by renowned Tibetan teachers - including Lama Zopa Rinpoche and the Fourth Panchen Lama - as well as instructive diagrams and full-color photographs.

Lorne Ladner, PhD, is a clinical psychologist in private practice in the suburbs of Washington DC, where he also directs and teaches at the Guhyasamaja Buddhist Center. Dr. Ladner has produced a training video on Mindful Therapy and provides workshops on the psychology of positive emotions, the integration of meditation and sychotherapy, and on Buddhist psychology. He is the author of The Lost Art of Compassion: Discovering the Practice of Happiness in the Meeting of Buddhism and Psychology (HarperOne 2004).

Lama Thubten Zopa Rinpoche is the Spiritual Director of the Foundation for the Preservation of the Mahayana Tradition (FPMT), a worldwide network of Buddhist centers, monasteries, and affiliated projects, including Wisdom Publications. Rinpoche was born in 1946 in the village of Thami in the Solo Khumbu region of Nepal near Mount Everest. His books include Transforming Problems into Happiness, How to Be Happy, and Ultimate Healing. He lives in Aptos, California.

"Lama Zopa Rinpoche once told Lorne Ladner the story of how, as a child, he had wondered why so many older people spun prayer wheels and how this had set him off on a search for texts on the practice. There being so few texts available, he was delighted eventually to be lent a text by another lama, and to discover the benefits of this practice. Ladner found he caught Zopa's enthusiasm and agreed to help him spread the word. The resulting book is a delightful introduction to the mani wheel including a non-scholarly introductory essay, translated commentarial texts, colour and black-and-white photographs, practical construction instructions and the main method of practice. The careful production of the book is commendable, especially the thoughtful inclusion of photocopiable mantras and Tibetan-style practice sheets at the end." (DharmaLife)

"Prayer wheels are as ubiquitous an element of Tibetan Buddhist practice as are the repetitions of the mani mantra. Yet, especially in the West, little has been previously known of their history and proper use. In this jewel of a book, and at the urging of Lama Zopa Rinpoche, Lorne Ladner has brought together important textual sources, a Lama Zopa discourse, and his own personal experience to describe the symbolism, proper construction, ritual, and benefits of prayer wheel practice. Thus, Wheel of Great Compassion is a marvelous-and necessary-addition to the library of any serious practitioner and to anyone interested in the heretofore unknown particulars of mani practice." (Prof. Jan Willis, author of Enlightened Beings and Dreaming Me: An African American Woman's Spiritual Journey)

"This new book fills a gap in the literature on Tibetan ritual and practice... Excellent instructions and texts are given for meditation; useful charts, photos, and diagrams complement the text. Good for public and academic libaries; all readership levels." (CHOICE)

"Instructive... Ladner presents a useful overview of this practice and several pertinent texts by renowned Tibetan teachers including Lama Thubten Zopa Rinpoche and the Fourth Panchen Lama. There are also diagrams, photos, and a description of the proper method for constructing and filling a prayer wheel with mantras." (Spirituality & Health)