Items related to The Crane Wife 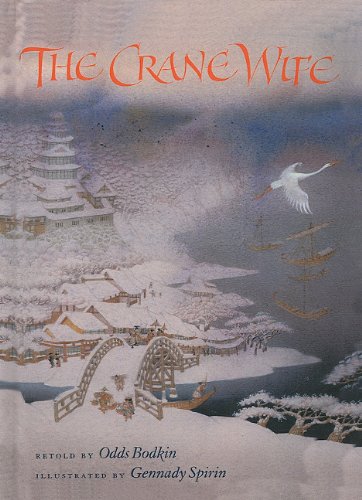 When Osamu, a lonely sail maker, nurses an injured crane one blustery night, he never suspects that this simple act of kindness will change his life forever.
This retelling of a traditional Japanese folktale teaches readers young or old a lesson about life and love.

This classic Japanese folktale, accompanied by stunning paintings by award-winning illustrator Gennady Spirin, gently explores the nature of love, promises, and betrayal. Osamu was a sail maker who lived high above the sea. "As he pulled the warp and weft of his sail together, he would often think to himself, How beautiful the cranes are. Of all the birds, they are the most like sails. It is as if the wind is held in their wings." One blustery night, a large crane crashes into Osamu's door and lies stunned on his porch. The lonely sail maker nurses it back to health and watches the graceful bird soar away. When this crane returns to Osamu's door in the disguise of a beautiful young woman, the drama really begins. They fall in love, and marry, but there comes a time when there is no longer food for them to eat. Yukiko tells her husband that she can make a magic sail for him to sell in the village, but that he must promise never to look at her while she is making it, and later, that he must never expect her to make another one. Both promises are broken, and in the end, Osamu never sees her again: "He wove simple sails for the rest of his years, there at his window, gazing at the marsh and the white cranes. And each autumn, in the season of storms, he waited for a knock on his door." Spirin's moody, intricate watercolor illustrations evoke medieval Japan, and perfectly complement the spare, poetic prose of Odds Bodkin's skillful retelling. (Ages 5 and older) --Karin Snelson

ODDS BODKIN is an acclaimed storyteller, composer, and teacher of the art of storytelling. He lives in New Hampshire.

Book Description Prebound. Condition: New. Prebound. When Osamu, a lonely sail maker, nurses an injured crane one blustery night, he never suspects that this simple act of kindness will change his life forever.This retelling of a traditional .Shipping may be from multiple locations in the US or from the UK, depending on stock availability. 32 pages. 0.363. Seller Inventory # 9780756912420