Items related to Who Was Albert Einstein?

Brallier, Jess Who Was Albert Einstein?

Who Was Albert Einstein? 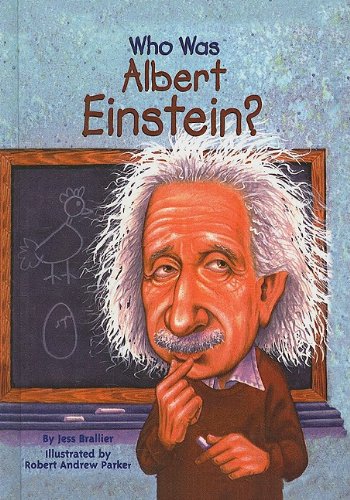 Full of the details kids want to know, the true story of scientist Albert Einstein is told in a fun, engaging way. Illustrations.

Jess Brallier is the publisher of Planet Dexter and the author of more than 20 books. He lives in Reading, MA.

Who Was
Albert
Einstein?

Who Was
Albert
Einstein?

Who Was Albert Einstein?

“For an idea that does not at first seem insane, there is no hope.”

Did you know that Albert Einstein was a very poor student who got kicked out of school? Well, he was. Yet he was one of the most brilliant people that the world has ever known.

Did you know that Albert was a peace-loving person who hated war? Well, he was. Yet his work led to the creation of the most destructive bomb ever.

Did you know that Albert was shy and hated publicity and attention? Yet he was a media superstar. Even now, fifty years after his death, Hollywood still makes movies about him—and T-shirts, coffee mugs, and posters are decorated with pictures of his famous face.

Who was Albert Einstein? You are about to find out.

Albert Einstein made his entrance into the world on March 14, 1879, in Ulm, Germany. He certainly didn’t seem like an extraordinary child. He was chubby and pale with thick, black hair. He was so quiet and shy that his parents worried that there was something wrong with him. They took Albert to doctors. “He doesn’t talk,” his parents explained. The doctors found nothing wrong.

The story goes that Albert didn’t speak a word until he was three or four years old. Then suddenly, over supper one night, he said, “The soup is too hot.” Greatly relieved, his parents asked why he had never said anything before. “Because,” little Albert replied, “up to now, everything has been fine.” Is this story true? There’s no proof.

Most boys his age played soldier and other rough-and-tumble games. Not Albert. When Albert saw real soldiers marching with their blank faces, they frightened him. Albert preferred to stay by himself and daydream. He enjoyed playing with blocks and building houses out of playing cards—some of them were fourteen stories high.

His parents continued to worry about their lonely and quiet son. They took him to more doctors. “Could there be something wrong with his brain?” his parents asked. Once again, doctors found nothing wrong with the boy. It was just his nature. He was quiet. He was a thinker.

Albert’s father and uncle had a business that sold batteries, generators, and wire. Electricity fascinated Albert. It was invisible, powerful, and dangerous. Electricity was like some mysterious secret. Albert pestered his father and uncle with lots of questions. How fast is electricity? Is there a way to see it? What’s it made of? If there’s electricity, could there be other strange and mysterious forces in the universe?

Albert enjoyed thinking about a world beyond the one that could be seen or explained. As he later said, “Imagination is more important than knowledge. Knowledge is limited. Imagination encircles the world.”

1. Who Was Albert Einstein? (Hardback)

2. Who Was Albert Einstein? (Hardback)

3. Who Was Albert Einstein? (Prebound)

Book Description Prebound. Condition: New. Prebound. Shipping may be from multiple locations in the US or from the UK, depending on stock availability. 105 pages. 0.204. Seller Inventory # 9780756915865

4. Who Was Albert Einstein?

5. Who Was Albert Einstein?

6. Who Was Albert Einstein?

9. Who Was Albert Einstein? (Prebound)

Book Description Prebound. Condition: New. Prebound. Shipping may be from our Sydney, NSW warehouse or from our UK or US warehouse, depending on stock availability. 105 pages. 0.204. Seller Inventory # 9780756915865