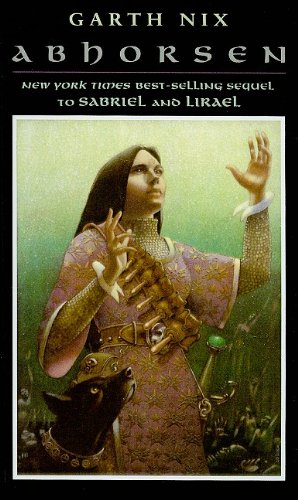 Now available in paperback--the New York Times bestselling conclusion to the Abhorsen trilogy. Lirael, now revealed to be Abhorsen-in-Waiting, realizes that she and her three companions are all that stand between an ancient horror and the world.

Before she went to join Sam and Mogget downstairs, Lirael paused for a moment to look at herself in the tall silver mirror that hung on the wall of her room. The image that faced her bore little resemblance to the Second Assistant Librarian of the Clayr. She saw a warlike and grim young woman, dark hair bound back with a silver cord rather than hanging free to disguise her face. She no longer wore her librarian's waistcoat, and she had a long Nehima at her side rather than a library-issue dagger. but she had kept her library whistle, tucking it into the small pouch at her belt. Though she was many, many leagues from any help the whistle might summon, she felt the need to cling to some small part of her past and her identity.She had become an Abhorsen, Lirael thought, at least on the outside.

After Centuries in Captivity, the Destroyer Is Nearly Free.

The Abhorsen Sabriel and King Touchstone are missing, leaving only Lirael—newly come into her inheritance as the Abhorsen-in-Waiting—to stop the Destroyer. If Orannis's unspeakable powers are unleashed, it will mean the end of all Life. With only a vision from the Clayr to guide her and the help of her companions, Sam, the Disreputable Dog, and Mogget, Lirael must search in both Life and Death for some means to defeat the evil destructor—before it is too late. . . .

The apocalyptic conclusion to the series of events that began with Sabriel and continued in Lirael, the New York Times bestselling Abhorsen is an electrifying reading experience not to be missed.

Book Description Prebound. Condition: New. Prebound. " Orannis the Destroyer has been freed"And only Lirael, newly come into her inheritance as the Abhorsen-in-Waiting, has any chance of stopping it. She and her companions ? S.Shipping may be from multiple locations in the US or from the UK, depending on stock availability. 518 pages. 0.340. Seller Inventory # 9780756931803