Items related to Dave at Night 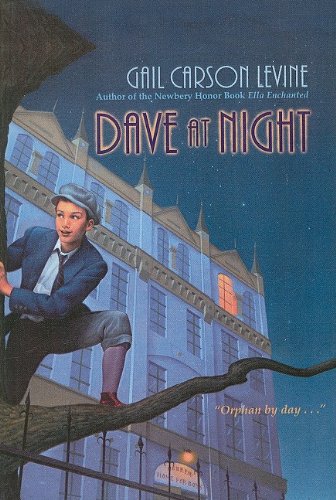 If nobody wants him, that's fine.He'll just take care of himself.

When his father dies, Dave knows nothing will ever be thesame. And then it happens. Dave lands in an orphanage -- the cold and strict Hebrew Home for Boys in Harlem -- far from the life he knew on the Lower East Side. But he's not so worried. He knows he'll be okay. He always is. If it doesn't work out, he'll just leave, find a better place to stay. But it's not that simple.

Outside the gates of the orphanage, the nighttime streets of Harlem buzz with jazz musicians and swindlers; exclusive parties and mystifying strangers. Inside, another world unfolds, thick with rare friendships and bitter enemies. Perhaps somewhere, among it all, Dave can find a place that feels like home.

"Gideon the Genius" and "Dave the Daredevil," their father called them: two Jewish boys growing up in 1920s New York, playing stickball and--in Dave's case--getting into trouble. But when their father dies, Dave finds himself separated from his older brother and thrust into the cold halls of the HHB, the Hebrew Home for Boys (which he later dubs the "Hopeless House of Beggars" and the "Hell Hole for Brats," among other things).

Eager to escape the strict rules, constant bullying, and tasteless gruel of the orphanage, the Daredevil hops the wall one night to explore the streets of Harlem. He hears what he thinks is someone--or something?--laughing, but traces the sound to a late-night trumpeter shuffling backward into a wild "rent party." And just as quickly as he'd found himself stuck in the HHB, Dave is immersed in yet another world--the swinging salons and speakeasies of the Harlem Renaissance. Cramped, crazy parties packed with the likes of Langston Hughes and Countee Cullen give Dave refuge from life at the orphanage and awaken his artistic bent. And Dave's new friends, among them a grandfatherly "gonif" ("somebody who fools people out of their money") and a young "colored" heiress who takes a shine to him, help turn things around for him at the HHB.

The skilled Gail Carson Levine, Newbery Medal-winning author of Ella Enchanted, clearly tells this tale from her heart, as the story is based on her own father's childhood spent in the real-life HOA (Hebrew Orphan Asylum). (Ages 8 to 12) --Paul Hughes

The year is 1926. Dave's beloved father is dead and his stepmother doesn't want him. Only the HHB will take him in--Hebrew Home for Boys -- Hell Hold for Brats. But Dave is tough and a troublemaker. He can take care of himself. If he doesn't like the Home, he'll run away and find a better place. Only it's not that simple...

Book Description Prebound. Condition: New. Prebound. If nobody wants him, that's fine.He'll just take care of himself.When his father dies, Dave knows nothing will ever be thesame. And then it happens. Dave lands in an orphanage &md.Shipping may be from multiple locations in the US or from the UK, depending on stock availability. 281 pages. 0.249. Seller Inventory # 9780756941017