Items related to The Amulet of Samarkand (Bartimaeus Trilogy (Pb)) 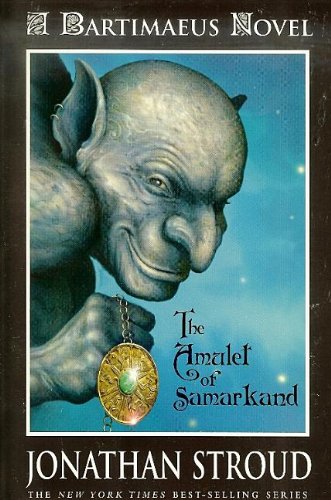 Nathaniel is a magician's apprentice, taking his first lessons in the arts of magic. But when a devious hot-shot wizard named Simon Lovelace ruthlessly humiliates Nathaniel in front of his elders, Nathaniel decides to kick up his education a few notches and show Lovelace who's boss. With revenge on his mind, he summons the powerful djinni, Bartimaeus. But summoning Bartimaeus and controlling him are two different things entirely, and when Nathaniel sends the djinni out to steal Lovelace's greatest treasure, the Amulet of Samarkand, he finds himself caught up in a whirlwind of magical espionage, murder, and rebellion.

Nathaniel is a boy magician-in-training, sold to the government by his birth parents at the age of five and sent to live as an apprentice to a master. Powerful magicians rule Britain, and its empire, and Nathaniel is told his is the "ultimate sacrifice" for a "noble destiny." If leaving his parents and erasing his past life isn't tough enough, Nathaniel's master, Arthur Underwood, is a cold, condescending, and cruel middle-ranking magician in the Ministry of Internal Affairs. The boy's only saving grace is the master's wife, Martha Underwood, who shows him genuine affection that he rewards with fierce devotion. Nathaniel gets along tolerably well over the years in the Underwood household until the summer before his eleventh birthday. Everything changes when he is publicly humiliated by the ruthless magician Simon Lovelace and betrayed by his cowardly master who does not defend him.

Nathaniel vows revenge. In a Faustian fever, he devours magical texts and hones his magic skills, all the while trying to appear subservient to his master. When he musters the strength to summon the 5,000-year-old djinni Bartimaeus to avenge Lovelace by stealing the powerful Amulet of Samarkand, the boy magician plunges into a situation more dangerous and deadly than anything he could ever imagine. In British author Jonathan Stroud's excellent novel, the first of The Bartimaeus Trilogy, the story switches back and forth from Bartimaeus's first-person point of view to third-person narrative about Nathaniel. Here's the best part: Bartimaeus is absolutely hilarious, with a wit that snaps, crackles, and pops. His dryly sarcastic, irreverent asides spill out into copious footnotes that no one in his or her right mind would skip over. A sophisticated, suspenseful, brilliantly crafted, dead-funny book that will leave readers anxious for more. (Ages 11 to adult) --Karin Snelson

The first audiobook in a thrilling new trilogy about an apprentice magician and the powerful djinni he summons.

Nathaniel is a young magician with only one thing on his mind: revenge.

As an apprentice to the great magician Underwood, Nathaniel is gradually being schooled in the traditional art of magic. All is well until he has a life-changing encounter with Simon Lovelace, a rising, star magician. When Simon brutally humiliates Nathaniel in front of everyone he knows, Nathaniel decides to speed up his magical education, teaching himself spells way beyond his years. Eventually, he masters one of the most difficult spells of all: summoning the all-powerful djinni, Bartimeus.

But summoning Bartimeus and controlling him are two very different things--and Nathaniel may be in way over his head.