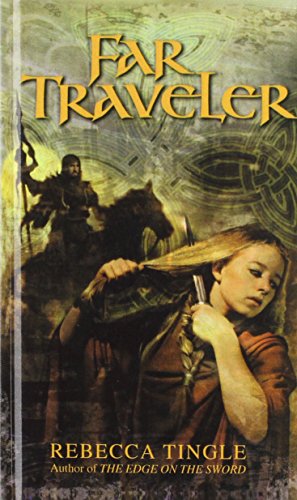 When King Edward gives his niece Elfwyn two choices--marry one of his allies or become a nun--Wyn is at a loss to decide. Her strong, warrior mother has just died, so it's impossible to know what she would have wanted.

Wyn takes the first risk of her life and flees. Disguising herself as a boy, she adopts a new identity as a traveling storyteller called Widsith (far traveler) and reinvents herself, drawing upon the books she has loved all her life. Soon she finds her fate inextricably tied with the dark-eyed King Wilfrid, who knows her only as Widsith, and wants her help in a plot against her own uncle.

Grade 7 Up - An exciting novel set in 10th-century England. In this sequel to The Edge on the Sword (Putnam, 2001), which ended as King Alfred's daughter, Æthelflæd, was about to marry Ethelred of Mercia, Tingle moves a few years forward to tell of Æthelflæd's 16-year-old daughter, Ælfwyn. A scholarly girl with no interest in the riding, swordplay, or politics that absorb her widowed mother, Wyn is surprised to learn that her uncle, the West Saxon King Edward, has arranged her marriage to a much older earl in order to solidify a political alliance. Then her mother's unexpected death throws Mercia's future into a state of uncertainty. With King Wilfrid of Northumbria eager for an alliance with Mercia, Wyn's uncle insists that her marriage take place immediately or that she enter a convent. Knowing that either choice will mean the downfall of her country, Wyn decides instead to flee. Disguised as a boy, she passes herself off as a scop (itinerant bard) and adopts the name Widsith ("Far Traveler"). By chance, she joins King Wilfrid and his men and soon finds herself falling in love with him. When she unwittingly becomes embroiled in Wil's attempts to regain power from her uncle, she must decide where her loyalties lie. This compelling novel is filled with well-researched details, an action-packed plot, and well-drawn and sympathetic characters. Tingle is a worthy successor to Rosemary Sutcliff, sharing her ability to make British history come to life for modern readers. - Ginny Gustin, Sonoma County Library System, Santa Rosa, CA
Copyright © Reed Business Information, a division of Reed Elsevier Inc. All rights reserved.