Items related to The Urban Treasure Hunter: A Practical Handbook for...

The Urban Treasure Hunter: A Practical Handbook for Beginners 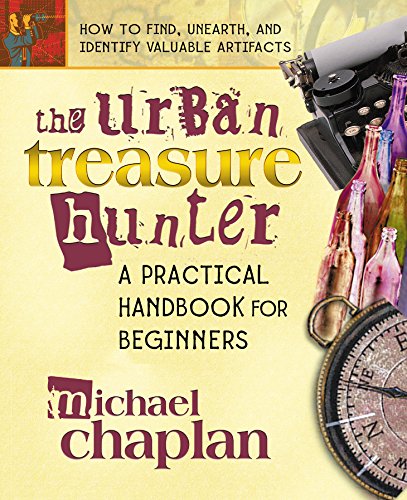 Every city possesses countless hidden treasures waiting to be discovered―ancient artifacts, valuable jewelry, and vintage coins, as well as hundreds of other highly sought-after collectibles. Michael Chaplan, treasure hunter extraordinaire, has written a complete and practical guide to locating, unearthing, and identifying all of those treasures. The book begins with the basics, and then presents a working knowledge of digs. An up-to-date resource section provides useful lists of specialized catalog companies and helpful websites, organizations, magazines, and books.

Whether you are an avid collector of artifacts, a weekend explorer in search of adventure, or simply a creative person in need of something fun to do, you will find that The Urban Treasure Hunter provides the perfect rewarding hobby.

Michael Chaplan received a master’s degree in anthropology from Long Island University and a master’s degree in public health from Columbia University. While maintaining a successful professional career in public health, the author has pursued his interest in treasure hunting for over twenty years. Traveling both here and abroad, he has recovered thousands of old coins, hidden caches, museum quality relics, Indian artifacts, and valuable collectibles.

Something hidden. Go and find it.

Go and look behind the Ranges―

Something lost behind the Ranges.

Lost and waiting for you. Go!

Urban areas are the most diverse and rewarding treasure hunting frontier in America, and The Urban Treasure Hunter will show you how to harvest their treasures while also having some great adventures. There’s no need to travel to steamy, faraway places to find treasure. It’s right there in your own hometown.

Curiously, most people believe the fallacy that everything has already been found where they live, which is the precise mindset that has kept city-style treasure hunting the province of a canny new breed of urban adventurer. Believe me, treasure is found often enough by people who know how and where to look for it.

And that’s what The Urban Treasure Hunter is all about. It offers a complete course of hands-on instruction for finding lost, hidden, and long-forgotten treasures where you live. The types of recoverable urban treasures that I’m talking about include rare old coins, lost jewelry, hidden money caches, valuable historical relics, criminal swag, antique bottles, and prehistoric Native American artifacts made of chipped stone. Delving into your city’s past will provide plenty of challenging projects, and a metal detector will be your time machine.

Actually, I consider this book a payback because many of the ideas and techniques it contains I picked up from fellow urban treasure hunters during chance field encounters when I was learning the ropes. Being a researcher and a communicative person, I took an interest in their adventures and fascinating finds, and asked them about any successful innovations they may have introduced into their search efforts. Because of what I learned from these treasure hunters, who included some very talented pros, I became a much better treasure hunter.

Finding treasure has always been a universal desire. When Mark Twain observed, in The Adventures of Tom Sawyer, that “there comes a time in every rightly constructed boy’s life when he has a raging desire to go somewhere and dig for hidden treasure,” he correctly identified a vibrant dream that most people have wanted to pursue.

Few people have been able to actualize this fantasy, however, due to the hectic world in which we live and the more immediate concerns that vie for our attention. Instead, we experience the thrill vicariously when we see a suntanned adventurer triumphantly recovering a long-lost treasure on television or in the movies. Well, that exhilarating success can also be yours!

Each chapter of The Urban Treasure Hunter is a map that will guide you in one of the many interesting and rewarding treasure hunting directions that await you in a city. For example, some of the topics that I will cover are the role of local history in your searches, cultivating a treasure awareness, dealing with the public, equipment and search strategies, research and project development, exploring city parks for treasure, caring for and marketing your finds, safety and “strange encounter” issues, and interpreting archaeological site reports. I also include a confidence building do-it-yourself project for constructing a very useful sifter.

You get the idea. It’s really pretty easy to begin treasure hunting in areas that are surprisingly close to home and accessible to the general public. By the time you’ve finished reading this book, you should be ready to lead your own intrepid treasure hunting expeditions around town. Remember, cities are constantly changing and there’s always something new to explore.

Undeniably, the urban environment is a very distinct arena for treasure hunting and one that has been relatively neglected in the popular literature. It just doesn’t seem exotic next to such illustrious feats as Mel Fisher’s discovery of the lost seventeenth century Spanish treasure ship La Señora de Atocha, which had millions in gold and jewels on board, or the diehard search by legions of crusty old miners for the legendary Lost Dutchman Mine in the remote Superstition Mountains.

But the truth of the matter is that you can also do pretty well where you live and experience the same romantic thrill of discovery. Urban treasure hunting is a perfect example of looking in your own back yard when considering substantial treasure finds. There’s plenty of treasure lying around in your city waiting to be found. And you can find it.

With the proper equipment, sensible expectations, and a guide that points you in the right direction, you may be the next person to hit it big. I am not promising any miracles, only a reward that matches your input, plus an interesting array of challenging adventures and feelings of personal accomplishment―which perhaps are the greatest treasures of all.

So, throw away those old ideas about not finding treasure in a city and join me in an exciting and profitable new challenge―as an urban treasure hunter.

1. The Urban Treasure Hunter: A Practical Handbook for Beginners

2. The Urban Treasure Hunter: A Practical Handbook for Beginners

3. The Urban Treasure Hunter: A Practical Handbook for Beginners

4. The Urban Treasure Hunter: A Practical Handbook for Beginners

5. The Urban Treasure Hunter: A Practical Handbook for Beginners

6. The Urban Treasure Hunter: A Practical Handbook for Beginners

7. THE URBAN TREASURE HUNTER: A PRA

8. THE URBAN TREASURE HUNTER: A PRA