Items related to Fit Baby, Smart Baby, Your Baby!: From Birth to Age... 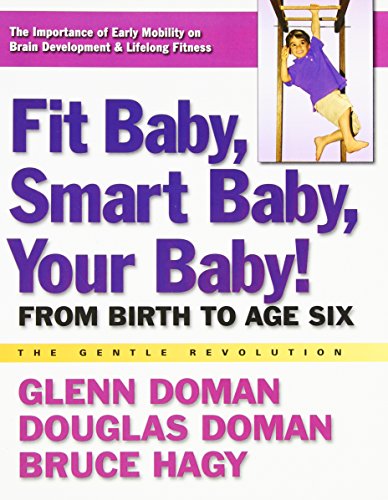 The early development of mobility in newborns is a vital part of their future ability to learn and grow to full potential. We may be wasting our children's most important years by preventing them from physically exploring their world and maximizing their mobility development when they are young-the time that is is easiest for them to do so. In Fit, Baby, Smart Baby, Your Baby!, Glenn Doman-founder of The Institutes for the Achievement of Human Potential-along with Douglas Doman and Bruce Hagy guide you in maximizing your child's physical capabilities. They clearly explain each stage of mobility and show how to create an enviroment that will help your baby more easily achieve that stage. Full-color charts, photographs, illustrations, and detailed yet easy-to-follow instructions are included to help you create an effective home program.

This inspiring book shows how the team of mother, father, and baby can explore and discover together the joys of human mobility. From learning the simple but vital stage of crawling to the beginnings of the sophisticated skills of the gymnast, this athletic team is the one that's most important to baby.

Glenn Doman received his degree in physical therapy from the University of Pennsylvania in 1940. From that point on, he began pioneering the field of child brain development. In 1955, he founded The Institutes' world-renowned work with brain-injured children had led to vital discoveries regarding the growth and development of well children. The author has lived with, studied, and worked with children in more than one hundred nations, ranging from the most civilized to the most primitive. Doman is also the international best-selling author of six books, all part of the Gentle Revolution Series, including How To Teach Yor Baby To Read, How To Teach Your Baby Math, and How To Give Your Baby Encyclopedic Knowledge.

Douglas Doman is the former Vice President of The Institutes for the Achievement of Human Potential and the son of founder Glenn Doman. His early years working at The Institutes were spent establishing the School for Human Development for brain-injured young adults. He worked closely with Bruce Hagy to create the world’s first Human Development Course, a circuit of physical activities that promote neurological organization and development.

Bruce Hagy is the former director of The Institutes for the Achievement of Physical Excellence. He joined The Institutes' staff in 1974, and his background in health and physical education quickly led him to become involved with the physical challenges posed by both well and hurt children. Excerpt. © Reprinted by permission. All rights reserved.:

Perhaps it would be wise to start at the end, although the hundred or so people who make up the staff of The Institutes for the Achievement of Human Potential in Philadelphia have devoted all of their lives to starting at the very beginning. Still, a reader, it has always seemed to me, has a right to know from the first couple of pages what a book is going to say.

This book will demonstrate that being physically superb is not limited to a few rare children who, by virtue of some special genetic potential, have within them the seeds of physical genius.

This book says that every child born has, by virtue of his splendid gift of the genes of Homo sapiens, the inherent right to be physically superb.

The right to be physically superb is a birthright.

We have studied human mobility in the most practical and hardnosed way in tens of thousands of newborns, infants, babies, tiny kids, children, adults, and old people, from its beginnings, in the form of truncal movements in utero; through crawling in infants; creeping in babies; early walking in tiny kids; skilled walking; running and jumping in children; superbly skilled and breathtakingly beautiful athletic prowess in young people; through all its astonishing day-by-day ability to carry us through life; to its ultimate decline and fall in old age.

We have studied mobility in a more theoretical way from its earliest origins, perhaps three-and-a-half billion years ago, when the two great kingdoms of living matter took their separate paths to become the growing but physically immobile Kingdom of the Plants and the Kingdom of the Animals, which could move from one place to another at will.

We have studied the beginnings of human mobility in Australopithecus africanus, discovered by our own Professor Raymond Dart, whose announcement of that discovery in 1923 stunned the entire world of anthropology. When these ancient creatures rose to walk on their feet, and thus freed their hands from the mobility role long enough to pick up a club as a weapon in one hand and a twig as a primitive tool in the other, the way opened for modern humans to be born.

Since that beginning, human beings have walked upright on the earth with their hands free to use tools―the use of which has made them brighter. With greater brightness, the human race has been able to invent even more complex tools to use to learn and understand even more about the earth, and thus was modern human intelligence born.

Today we stand as the most brilliant and fearsome of all of the Creator’s creatures and the only one of them that has the ability to destroy the planet upon which we live, or to make it, as a product of our intelligence, a place nearer to the Paradise of which we have always dreamed.

That towering intelligence had its origins in human mobility and in human manual function.

This is no mere theoretical construction. It is clearly visible in each succeeding presentation of the Olympic Games. In every Olympic year, old records of human mobility and manual function are broken and new world records are set.

It is worth noting that most of the present-day gold medal winners are noticeably younger than were the previous winners.

Where will it all end? Today Olympian gymnasts in their teens perform gymnastic feats that were literally not even dreamed of by Olympians of fifty years ago.

It will not end.

Indeed, as we shall see, mobility and manual intelligence are two of the six kinds of human intelligence.

What, then, have we learned about human beings in the thousands of people-years that the staff of The Institutes has devoted to understanding and improving human physical performance? We can state it in a single paragraph.

We are totally persuaded that: Every child born has, at the instant of birth, a higher potential intelligence than Leonardo da Vinci ever used.

That potential intelligence, inherent at birth, includes, and indeed begins with, physical function.

This book will tell all parents who wish to know how to teach their babies to be physically superb and why, after a half-century of dramatically improving human physical ability in children, the authors believe it is a good idea to do so.

Book Description Paperback. Condition: New. Paperback. Shipping may be from multiple locations in the US or from the UK, depending on stock availability. 288 pages. 0.866. Seller Inventory # 9780757003769

Book Description Square One Publishers, United States, 2012. Paperback. Condition: New. Replaces How to Teach Your Bab ed. Language: English. Brand new Book. This book explains each stage of mobility and shows you how to create an environment that will help your baby move more easily. From learning the simple but vital state of crawling to the beginnings of the sophisticated skills of the gymnast. Seller Inventory # AAS9780757003769

Book Description Square One Publishers, United States, 2012. Paperback. Condition: New. Replaces How to Teach Your Bab ed. Language: English. Brand new Book. This book explains each stage of mobility and shows you how to create an environment that will help your baby move more easily. From learning the simple but vital state of crawling to the beginnings of the sophisticated skills of the gymnast. Seller Inventory # AAS9780757003769