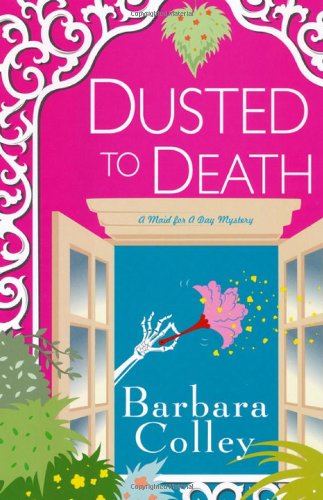 When a big Hollywood movie studio comes to New Orleans and wants to use Bitsy Duhe's gorgeous Victorian house for a shoot, Bitsy consents--as long as Charlotte La Rue, owner of Maid for a Day, agrees to take care of her beloved home during filming. . .

Soon Charlotte meets the cast and crew, including Hollywood ingénue Angel Martinique. The movie seems to be going well--until a body is found dead in Angel's dressing room, a bloody letter opener just a few feet away. To Charlotte, there's no shortage of suspects. But when the police zero in on Angel, Charlotte does a little digging into Angel's past, and comes up with a bit more dirt than she bargained for--enough to put her in the crosshairs of danger if she doesn't watch her step. . .

"This cozy series gets better with each book." --Library Journal

Barbara Colley is an award-winning author whose books have been published in sixteen foreign languages. A native of Louisiana, she lives with her family in a suburb of New Orleans. Besides writing and sharing her stories, she loves strolling through the historical New Orleans French Quarter and Garden District, which inspired the setting for her Charlotte La Rue mystery series, Readers can write to Barbara at P.O. Box 290, Boutte, LA 70039.

In Colley's featherweight eighth mystery to feature New Orleans maid Charlotte LaRue (after 2008's Wash and Die), Charlotte must keep tidy a Garden District mansion being used as a set for a movie starring legendary actor Hunter Lansky and hot rising actress Angel Martinique. Filming's barely underway when Charlotte discovers Angel's two-timing boyfriend stabbed to death with a letter opener, which turns out to be covered with Angel's fingerprints. Angel's chauffeur asks Charlotte to investigate, and the two head to Oakdale, Miss., to learn what they can about Angel's early life. Charlotte's PI boyfriend, Louis Thibodeaux, can't help because he's out of town, but Charlotte, a housecleaner's answer to Jessica Fletcher, has learned that cheese graters, bleach and buckets can come in handy in her sleuthing work. Charlotte is a sweetie, but this conventional cozy series could use some extra-strength twists to give it more heft. (Jan.)
Copyright © Reed Business Information, a division of Reed Elsevier Inc. All rights reserved.