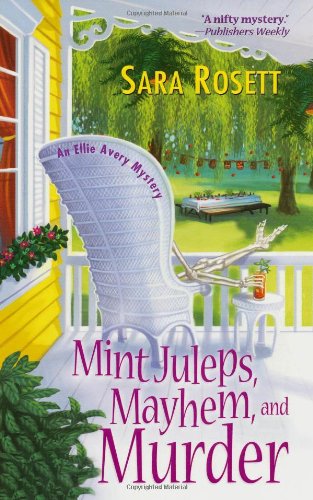 For Ellie Avery, the hardest thing about hosting a reunion of her husband Mitch's extended Southern family is remembering everyone's name. But this summer, the festivities are cut short by news that Mitch's Air Force squadron commander has been strangled. Then Mitch's look-alike cousin narrowly misses being shot during his daily workout, and Ellie realizes that someone wants to ground Mitch--permanently. Between her kids and her organizing business, she must unravel a perplexing mystery--or Mitch's afternoon jog may be a run for his life. . ..

"Some cozies just hit on all cylinders, and Rosett's Ellie Avery titles are among the best." --Library Journal

"Flows like a country creek after an all-day rain." --Shine

For military wife and professional organizer Ellie Avery, the hardest thing about hosting her husband Mitch's rambunctious Southern family reunion is usually remembering everyone's name, but this time her backyard bash is shadowed by menace after a killer shows up without an invitation. Before the last slice of peach pie is served, the family festivities are cut short by news that Mitch's squadron commander has been strangled -- and the prime suspect is his wife Denise, Ellie's close friend and fellow knitting enthusiast.

That same day, Ellie and the rest of the sleepy little town of North Dawkins, Georgia, are shocked to learn that one of Mitch's cousins, a fitness fanatic who's in town for the party, narrowly missed being shot when he collapsed during his daily workout. Everyone agrees that the bullet was a stray from hunters nearby -- but to Ellie the close call is as suspicious as a possum in a persimmon tree. As the humidity rises, so does the danger. Ellie must unravel a mystery that grows more perplexing every day. If she doesn't, Mitch's afternoon jog might become a run for his life.

In Rosett's nifty fifth Ellie Avery mystery (after 2009's Magnolias, Moonlight, and Murder), the strangulation murder of Col. Lewis Pershall shocks everyone at Taylor Air Force Base in North Dawkins, Ga. The popular Pershall was Ellie's husband Mitch's squadron commander. The victim's frantic wife, alarmed that she might be considered a suspect, asks amateur sleuth Ellie for help. As Ellie investigates, she discovers that Mitch and a cousin of his have also been targeted by someone with evil intent, each man having received an odd squadron coin from an anonymous source. Threatening letters to Pershall from an angry, troublemaking air force widow suggest she might be the culprit, but Ellie also suspects two jealous fellow officers of Pershall's. Fans of TV's Air Force Wives will especially appreciate Ellie, a smart crime solver who successfully navigates the challenges of military life. (Apr.)
Copyright © Reed Business Information, a division of Reed Elsevier Inc. All rights reserved.