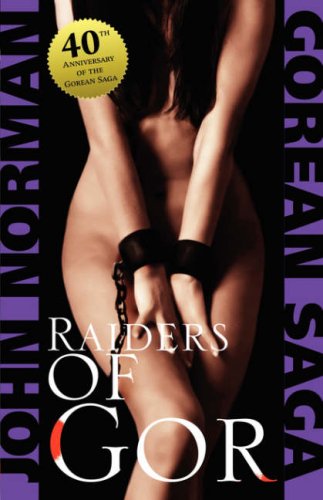 In this sixth book in the Gorean series, former earthman Tarl Cabot finds himself in the most depraved city that Gor has to offer. Port Kar is a city of robbers, brigands and men without allegiance to any cause or kingdom where the weak are quickly consumed by the strong. However, Tarl Cabot is able to flourish in the cutthroat environment of the city, for he is a powerful Tarnsman, used to having his way. He finds that there is much to learn in Port Kar, where the people are celebrated for their skill of training their voluptuous slaves into utter obedience. Coinciding with the 40th anniversary of the first book of the Gorean Saga, TARNSMAN OF GOR, E-Reads is proud to release the very first complete publication of all Gor books by John Norman, in both print and ebook editions, including the long-awaited 26th novel in the saga, WITNESS OF GOR. Many of the original Gor books have been out of print for years, but their popularity has endured. Each book of this release has been specially edited by the author and is a definitive text.

John Norman is creator of the Gorean Saga, a series of novels spanning dozens of titles that began in 1967 with TARNSMAN OF GOR and that are considered to be cult classics. He has also produced a three-installment fictional series, Telnarian Histories, plus two other fiction works and a nonfiction paperback entitled IMAGINATIVE SEX. He continues to write new novels in the Gorean saga, notably WITNESS OF GOR (2002) and PRIZE OF GOR (2008), both published by E-Reads. At Gor Chronicles, a web site specially created for his tremendous fan following, one may read everything there is to know about this unique fictional culture. Mr. Norman was born in Chicago, Illinois in 1931. He is married and has three children.