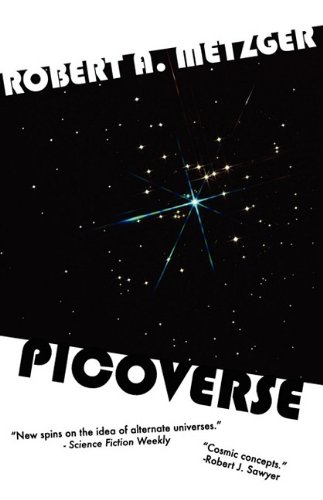 Robert Metzger writes classic hard SF but he does so in a way that emphasizes excitement and adventure and which shows the science in a way that makes it accessible and fascinating. In PICOVERSE, a team of physicists in 2007 is trying to develop fusion power via a new development in plasma physics, a Sonomak, but accidentally stumbles on a method to create new, smaller-than-usual universes, which they call picoverses. These replicate everything in our universe but on a smaller scale. A disastrous test of the Sonomak machine shakes things up and a new project director, previously unknown to the group, is appointed. Alexandra has her own secret priorities and one of them is to escape from her superiors into one of the picoverses. To do this, she needs the researchers to execute her plan. Unfortunately, things go amiss and the team finds itself stuck in a picoverse duplicating 1920s Earth, but with its own version of a Sonomak, vacuum tubes and all. Among the local team are Werner Heisenberg and Albert Einstein. As the pace of the story accelerates, the original team races from one picoverse to another, trying to return to their home base and thwart Alexandra's plans. In a clash of alternate realities, the fate of Earth and the entire universe hangs in the balance. Cosmic rabbits need to be pulled from alternate universe hats before this tale comes to a satisfying--and scientifically rigorous--end.

Robert A. Metzger is a research scientist in the area of semiconductors, high-speed telecommunication, and datacommunication devices. He has held distinguished teaching and consultation positions with Hughes Research Laboratories and the Georgia Institute of Technology. He is the author of the novel Quad World and 25 short stories published in The Magazine of Fantasy and Science Fiction, Amazing, Aboriginal SF, and Weird Tales. He has contributed many pieces to Wired, and is cofounder of a technical trade journal, Compound Semiconductor.

This fast-paced romp through multiple manmade universes from Metzger (Quad World) will appeal to hard SF fans who like their science served straight up. In 2007, a team of physicists working on fusion power stumble onto a way to create new, smaller universes picoverses which replicate everything in our universe but smaller. After a disastrous test of the Sonomak machine, the mysterious Alexandra takes over the project. She has her own priorities, which include escaping her bosses into one of the picoverses, and she needs researchers Katie, Horst and Jack to execute her plan. Naturally, things go awry, and Katie and company find themselves exiled to a picoverse that duplicates Earth in the 1920s. The Sonomak is a reality there, too though made with vacuum tubes and run by researchers who include Werner Heisenberg and Albert Einstein. This is just the start of a race through a number of picoverses, as our heroes attempt to get home and defeat the nonhuman Alexandra. Alternate realities collide, with the very fate of Earth and the universe at stake. The preponderance of characters with superhuman powers gets old, as does the author's holding back crucial information about events and then springing it on us just in time to save the day. But the book hangs together thematically turns out saving the universe is not about manipulating the fabric of space-time, but about manipulating someone who can manipulate the fabric of space-time and the happy ending satisfies. Agent, Richard Curtis. (Mar. 5)Forecast: Supportive blurbs from the likes of Gregory Benford, F. Paul Wilson and Charles Sheffield should help, but some readers may be put off by the author's over-reliance on deus ex machina.
Copyright 2002 Cahners Business Information, Inc.

Book Description eReads.com 2010-06-22, 2010. Paperback. Condition: Very Good. Item is in very good condition. If supplemental codes/CDs for textbooks are required please contact us prior to purchasing as they may be missing. Seller Inventory # DS-0759292930-2