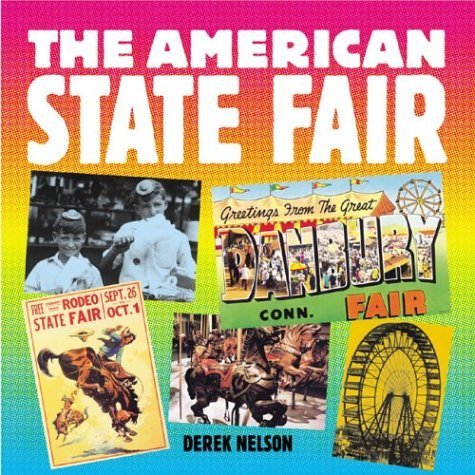 State Fairs are eagerly anticipated summertime celebrations across the country, each offering its own dizzying array of sights, sounds, aromas (some more pleasant than others), and entertainment options ranging from high-flying midway thrills to the traditional livestock and farm equipment shows. Take a nostalgic trip through the state fairs of the late 19th century through the mid-20th century. Over 200 photographs, authentic advertisements, and other memorabilia illustrate the thrill shows, butter queens, sideshows, dancing girls, tractor shows, carnival rides, auto races, hog barns, and square dances of the American state fair.

State fairs are eagerly anticipated summertime celebrations across the country, each offering its own dizzying array of sights, sounds, aromas (some pleasant, others a bit more subjective), and entertainment options ranging from high-flying midway thrills to the traditional livestock and farm equipment shows.

The American State Fair brings the summer's most prominent happening to life with photography culled from the archives of several states renowned for the grand scale and cultural significance of their state fairs. Chapters are arranged by state fair staples such as the midway, food, livestock, bake-offs, crafts, freak shows and more.

The book focuses on state fairs form the Civil War through the 1950s. This was the heyday of the fair, a time period when it was one of the most important rural events of the year for a culture that was mostly agricultural.

Over time, the fair evolved a bit, with the addition of electric lights opening the midway after dark. The fair also saw many new technologies introduced and showcased. Despite this, the fair was and remains a bastion of old-fashioned ways, with the long-standing fixtures such as livestock auctions, Ferris wheels, and so much more bringing a rich sense of tradition to this timeless summer event.

The American State Fair celebrates the event with more than 200 color and black and white photographs, illustrations, post cards, and poster art. A nostalgic look at one of America's favorite events, this book takes you on a timeless stroll down the midway, through the swine barn, and over to the race track.

The American State Fair is my tenth book. My last book, Off the Map, explores the curious origins and implications of geographic place names. It was published by Kodansha America of New York in November 1997, sold out its first two printings, and is coming out in paperback in Fall 1999. It was an alternate selection of the Book of the Month Club's History Book Club and a recent selection of the Quality Paperback Book Club. My earlier books, all published by Motorbooks International (now MBI) included Moonshiners, Bootleggers and Rumrunners (1995), The Ads That Won the War (1992) about the transformation of American advertising during World War II; and The Posters That Won the War (1991), about wartime patriotic posters. The books are large format, 40,000-80,000 words, illustrated with 100-200 photos. Hell-Bent for Leather (1990), about the history of leather flight jackets, won an Award of Excellence in the 1991 Midwest Region Journalism Awards from the Aviation Space Writers Association. My freelance experience also includes nearly 200 magazine and newspaper articles. Of recent note were (for The Washington Post, 2/26/97) "The Perennial Poultry Equation," examining why people always compare unusual meat to chicken; Spy, fireplace pokers as murder weapons (Sept. '91, the "pregnant Bruce Willis" issue), and "On the Shores of Gitche Gumbo" (spell-checking famous quotations); Golf Illustrated, "Playing Bad and Liking It" (April '90); Air&Space/Smithsonian, "Hell-Bent for Leather," the history and appeal of leather flight jackets (May-June '89).

In April 1997, I was awarded Second Prize for non-fiction in the 79th Irene Leache Memorial Literary Contest, the South's oldest existing such competition, drawing more than 1,000 entries in five categories. I have been a guest speaker at several writing conferences and have appeared on WHRO's radio's "Hearsay," WNIS radio, WVEC-TV and WTKR's "Morning Break." I've also done numerous book signings around the state and in Washington, D.C.