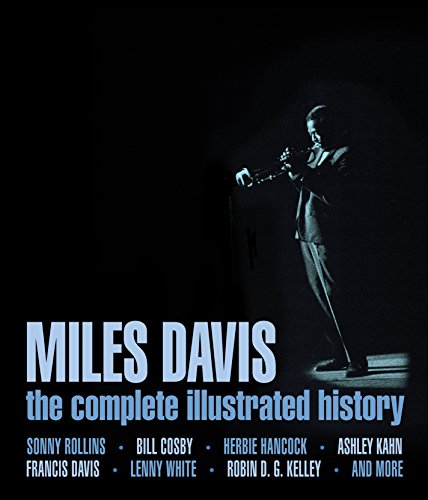 From the Back Cover: Here is the illustrated history of Miles Davis, the world’s most popular jazz trumpeter. As a composer, bandleader, and musical visionary, Davis remains one of the most innovative, influential, and respected figures in the history of music. He’s been at the forefront of bebop, cool jazz, hard bop, modal jazz, and jazz-rock fusion, and remains the favorite and best-selling jazz artist ever. “Miles is great. I still have the same opinion of him now as when I first heard him. He was a seeker, which was evident starting from his early work with Charlie Parker.”—Sonny Rollins “Miles’ primary goal was to encourage all of us to contribute to the development of the sound of that band. It was incredible that this great musician had the balls to let us go that far just because we chose to, and we felt totally comfortable making that kind of commitment professionally on the stage with Miles as our leader.”—Herbie Hancock “Miles was the person we copied the most: the way he dressed, the way he acted, the way he was, just being cool. If you had a stack of eleven LPs and you were going to go to do this young lady’s house and you had to ride public transportation, you would put on the same clothes Miles wore, or as close as you could. And on top of the stack so people could see it, you would put Miles’ latest LP. That’s how important he was to us.”—Bill Cosby Welcome to an all-star tribute to Miles, including interviews and recollections from Sonny Rollins, Bill Cosby, Herbie Hancock, Ron Carter, Clark Terry, Lenny White, Greg Tate, Ashley Kahn, Robin D. G. Kelley, Francis Davis, George Wein, Vincent Bessières, Gerald Early, Nate Chinen, Nalini Jones, Dave Liebman, Garth Cartwright, and more. Plus there are photographs from the archives of Francis Wolff, William Gottlieb, Bob Willoughby, William “PoPsie” Randolph, Lynn Goldsmith, and more. From the Inside Flap: Among the contributors: Sonny Rollins is one of the greatest living saxophonists, famous for honing his chops practicing on the Brooklyn Bridge. He first recorded with Miles Davis in 1951. Comedian Bill Cosby has been a jazz fan since way back when. Keyboardist Herbie Hancock joined Miles Davis' second great quintet in 1963 and played a starring role in redefining the jazz rhythm section and launching the post-bop sound. Jazz promoter and producer George Wein is one of the world's most famous jazz impresarios and the most important non-player in jazz history. He is the founder of the Newport Jazz Festival. Ashley Kahn has written books on the making of two major jazz albums, Kind of Blue by Miles Davis and A Love Supreme by John Coltrane, as well as a history of Impulse Records. Robin D. G. Kelley is the author of the landmark biography Thelonious Monk: The Life and Times of an American Original. Francis Davis is the jazz critic for The Village Voice, a contributing editor for The Atlantic Monthly, and author of numerous books on jazz and the blues. Garth Cartwright is a regular writer for The Guardian, The Sunday Times, and the BBC. He is the author of Princes Amongst Men: Journeys with Gypsy Musicians and More Miles Than Money: Journeys Through American Music.