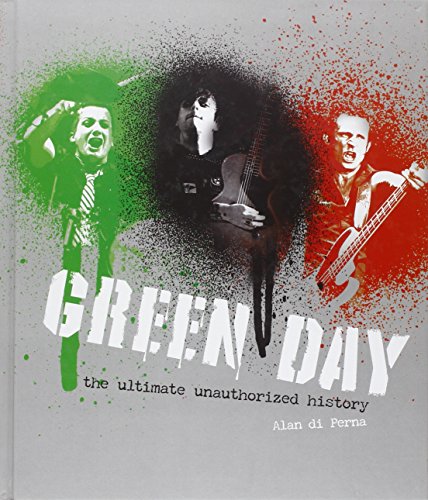 Formed in California’s East Bay in 1987 by a 15-year-old guitar player named Billie Joe Armstrong and his bass-playing friend Mike Dirnt (later joined by drummer Tre Cool), Green Day has risen from the Bay Area’s underground rock scene to become one of the world’s most popular bands. Lauded for bringing punk rock to the masses, Green Day’s remarkable rise from teenage garage band to multi-platinum artists is documented here for the first time to coincide with the band’s 25th anniversary. Author and frequent Guitar World contributor Alan di Perna, who has interviewed Green Day’s three members several times, offers readers and fans a complete band history, from their formation and first gigs in Berkeley, California,  and signing to the Lookout! label through their highs and lows, eight studio releases (including the opening salvo 39/Smooth, the door-opening Dookie, the less well-received Warning, and more), the critically acclaimed Broadway show American Idiot, and their latest recording and film efforts. Di Perna’s revealing text is accompanied by more than 300 visuals, including concert and candid off-stage photography, gig posters and handbills, 7-inch picture sleeves, rare vinyl, backstage passes, and more, all presented in a stunningly designed package.

Revered for bringing punk rock to the masses, Green Day has spent the last 25 years riding a remarkable rise from teenage garage band to world-conquering multi-platinum artists. For the first time, the Bay Area trio is documented in a beautifully designed and illustrated book timed to coincide with their landmark anniversary. A complete band history written by veteran music scribe and frequent Green Day interviewer Alan di Perna charts the band from their formation and first gigs in Berkeley through their many bestselling studio efforts and world tours, as well as their award-winning Broadway show. The story is complemented by nearly 300 visuals, including concert and candid off-stage photography, gig posters and handbills, 7-inch picture sleeves and vinyl, backstage passes, and more. Finally, a visual celebration worthy of one of the world’s most admired rock bands.

Alan di Perna is a longtime contributing editor for Guitar World and has also written for Billboard, Creem, Rolling Stone, and the San Francisco Herald Examiner Magazine, among other outlets worldwide. Green Day is just one of the numerous punk rock icons, from Johnny Rotten to Rancid, whom he has interviewed and written about over the years.

Alan di Perna (Fountain Hills, AZ) is a freelance journalist and a frequent contributor to Guitar World magazine who has interviewed and written about Green Day several times.