Items related to The Annals of Imperial Rome

Tacitus The Annals of Imperial Rome

The Annals of Imperial Rome 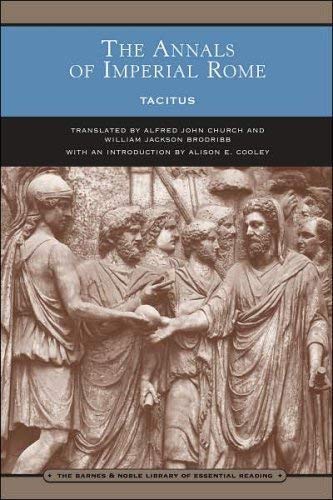 Synopsis The Annals of Imperial Rome offers a dramatic vision of imperial Rome during roughly the first half of the first century AD. Starting with the death of Augustus, Tacitus describes how the Julio-Claudian dynasty consolidated its grip upon the empire, only to end suddenly in AD 68 with the suicide of its last representative, the emperor Nero. Tacitus explores how increasingly decadent behavior by the emperors alienated the upper classes. He spares the reader no court intrigue, even while expressing his own scepticism about the accuracy of reports of scandals such as Nero's incest with his mother. Tacitus also describes the impact of the dynasty upon Rome's provincial subjects and its wars of expansion, including Claudius' conquest of Britain and the subsequent revolt led by the British queen Boudicca. Biography Tacitus was born ca. AD 56, probably in northern Italy or southern France, and made his way in Rome as a newcomer. He rose to the highest political rank of consul, and subsequently acting as governor of the prestigious province of Asia. Before The Annals and The Histories, Tacitus wrote the Agricola (a historical biography of his father-in-law, who played an important role in the pacification of Britain); the Germania (an ethnographical description of the Germans living on the fringes of the Roman empire); and the Dialogue On Orators (an exploration of the declining role of rhetoric in contemporary society).

1. The Annals of Imperial Rome [Paperback]