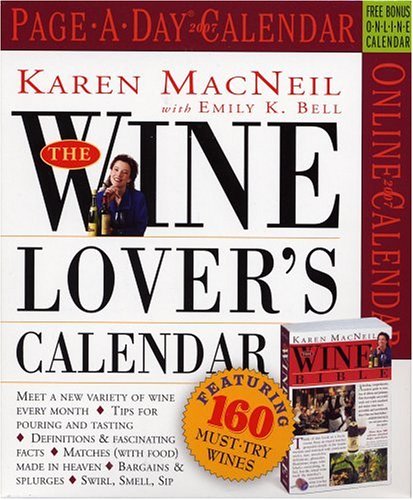 Why California chardonnays tend to be so buttery. Getting wine prepared for the holidays. Romantic sips for non Champagne lovers (try a white Burgundy Grand Cru). A refined, balanced, and all-around magnificent pinot noir from Sea Smoke and Kunde’s lively and exotic Magnolia Lane Sauvignon Blanc. Karen MacNeil, the passionate and supremely knowledgeable author of the bestselling The Wine Bible (with 300,000 copies in print) presents another delicious year of advice and recommendations. Includes Wine Words, Ask Karen, and lore: Winston Churchill so loved the 1947 vintage of Pol Roger Champagne, he ordered enough to last his lifetime—and drank a bottle every day!

Zaca Mesa's spicy, lively, and powerfully structured Z Three. From De Loach, an irresistibly smoky and intense sauvignon blanc. Discover a year of must-try recommendations and fabulous wine advice from Karen MacNeil, the passionate and knowledgeable author of the bestselling The Wine Bible.

Getting to know Pouilly-Fumé. Five great Italian summer wines. Plus ripasso and other wine words, to swirl or not to swirl, and that perfect match for chocolate-chip cookies—a malmsey Maderia.

In 2004 Karen MacNeil received the highest honor awarded to a wine professional in the United States–she was named “Outstanding Wine and Spirits Professional of the Year” by the James Beard Foundation. The following year she was named “2005 Wine Educator of the Year” by the European Wine Council. Past recipients of the Council’s awards have included journalist Morley Safer (60 Minutes), filmamker Francis Ford Coppola and winemaker Robert Mondavi. Karen is the host of “Wine, Food and Friends with Karen Macneil,” a 13-part series on PBS television nationally. For the last 25 years, Karen has been a writer, consultant, and educator whose articles on wine and food have been published in more than 50 United States magazines and newspapers including: The New York Times, Food & Wine, Saveur, and Town & Country. She is the author of the award-winning The Wine Bible –one of the best selling wine books in the United States, with more than 250,000 copies sold since it was released in 2001.