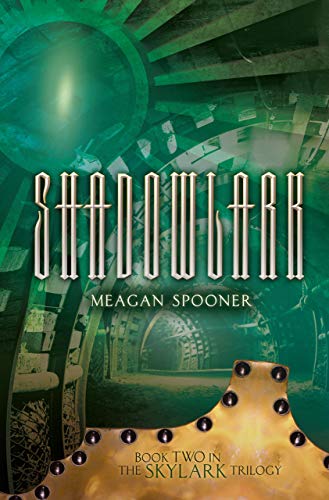 Ever since she escaped the city within the Wall, Lark Ainsley's wanted one thing: to find her brother Basil. She's always believed he would be the one to put an end to the constant fear and flight. And now, hidden underground in the chaotically magical city of Lethe, Lark feels closer to him than ever.  But Lethe is a city cowering in fear of its founder, the mysterious Prometheus, and of his private police force. To get the truth about what happened to Basil, Lark has no choice but to face Prometheus. Facing her fears has become second nature to Lark. Facing the truth is another matter. Lark never asked to be anyone's savior. She certainly never wanted to be anyone's weapon. She might not have a choice.

Meagan Spooner grew up reading and writing every spare moment of the day, while dreaming about life as an archaeologist, a marine biologist, an astronaut. She graduated from Hamilton College in New York with a degree in playwriting, and has spent several years since then living in Australia. She's traveled with her family all over the world to places like Egypt, South Africa, the Arctic, Greece, Antarctica, and the Galapagos, and there's a bit of every trip in every story she writes.

She currently lives and writes in Northern Virginia, but the siren call of travel is hard to resist, and there's no telling how long she’ll stay there.

In her spare time she plays guitar, plays video games, plays with her cat, and reads.

You can visit her online at http://www.meaganspooner.com.

*Starred Review* Having fled from the horrific dangers of home straight into the potentially horrific dangers of an outside landscape, Lark Ainsley (Skylark, 2012) is back and still searching for her brother, Basil, while trying to make sense of what her life will be in a world ravaged by old wars, terrifying technology, and magic gone wild. Joined by friend Tansy and mechanical “pixie” Nix, Lark’s journey is the classic hero’s quest. Her love interest, Oren, is an intriguing blend of light and dark as he struggles with his literal shadow side, the violent darkness that overtakes him every night as one of the Shadow people slowly driven insane by the rigors of living amid uncontrolled magic outside the protected cities. Set largely in a mysterious, vaguely menacing underground city called Lethe, the plot unfurls quickly and steadily with good pacing. Lethe is ruled by a harsh founder called Prometheus, who soon challenges Lark in ways she didn’t expect but must meet to find Basil. With its blend of dystopian, steampunk, and generally fantastical elements, Spooner’s follow-up is even stronger and more gripping than the debut and is sure to ensnare further loyal readers. Grades 9-12. --Julie Trevelyan