Items related to The Purim Superhero 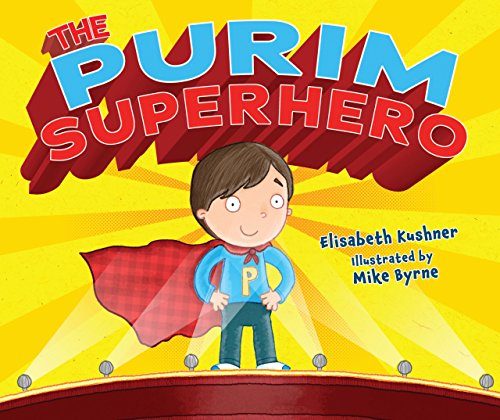 Nate loves aliens and he really wants to wear an alien costume for Purim, but his friends are all dressing as superheroes and he wants to fit in. What will he do? With the help of his two dads he makes a surprising decision.

Elisabeth Kushner lives in Vancouver, Canada, with her family and a jumble of books and musical instruments. If she were a superhero, she'd be Orange Ukulele Girl. Her favorite kind of hamentaschen is poppyseed. This is her first children’s book.

Mike Byrne grew up near Liverpool, U.K., and then moved to London to work as an illustrator by day and a crayon wielding crime fighter by night. He now lives with his wife and two cats in the countryside. He spends his days doodling and creating children's books fueled only by tea and cookies.

"Look on any bookseller's website and you'll find a long list of books about children with same-sex parents. Some attempt to explain how children were conceived or adopted, and others reassure children that having a family that's different is okay. As a gay parent, I'm glad to see this list, but the books I buy my 4-year-old are not about having same-sex parents, or adult relationships, or political correctness. Instead, they're about kids doing kid things and thinking kid thoughts while their two moms or two dads pop up here and there, as parents are inclined to do from time to time. One of the nice things about kids' books is that they build self-confidence by normalizing children's experiences. Just as children with heterosexual parents read books that mirror their families without making the parents' relationship the focus of the book, children of same-sex parents benefit from reading books that feature families like theirs. But, of course, kids' favorite books are centered on a topic that toddlers care about almost exclusively: themselves!

This is a lovely story that can [also] serve as an opportunity to learn about different traditions . . ." -- Parents Magazine

"People forget that Superman is an alien. This book is a reminder that that’s the source of his strength.

Here’s a secret that isn’t taught in school: Everyone has a superpower. It might be drawing monsters or kindness to strangers or the ability to read an unusual number of books. Nate’s power is that he feels like an alien. He’s the only boy in his class with two fathers, Daddy and Abba. All the boys in Nate’s Hebrew school class are dressing up as superheroes for Purim, but Nate really wants a green costume with antennae. (Comic-book fans would, of course, suggest that he dress as the Martian Manhunter.) 'Sometimes showing who you really are makes you stronger,' Abba says, 'even if you’re different from other people.' Nate’s secret power gives him unusual creativity, and his solution wins him an award for most original costume. Byrne’s illustrations make the ending especially satisfying, with half-a-dozen young superheroes standing around in tennis shoes. (Longtime superhero fans, however, will feel old when they see Wolverine in a picture book.) A generation from now, this book may feel hopelessly outdated: A moral about tolerance and being yourself may seem painfully obvious. Many will view this as a sign of progress. If that happens, it will be because of the work of heroes like Nate.

For now, this book is both timely and entirely satisfying." --Kirkus Reviews

"PreS-Gr 2--Nate is having a hard time choosing a costume for his synagogue's Purim celebration. All the boys in his Hebrew class plan to dress as superheroes, but he is much more interested in aliens. With help from his two fathers (Daddy and Abba) and inspired by the story of Queen Esther, he comes up with a 'Super Alien' outfit. Rabbi Joanie, dressed as a clown, awards him the prize for most original costume, and everyone is left smiling. The cartoon illustrations are bright and fun, depicting children at Hebrew school, Nate's home life, the Purim festival, details such as kippot worn at school and meals, and Abba's sewing machine ready to make costumes for Nate and his sister, Miri. With warmth and humor, this picture book demonstrates the Purim principle of standing up for one's beliefs. A solid purchase for libraries with strong Judaic collections and synagogues with an active Keshet (LGBT Jewish inclusion) group." -- School Library Journal