Items related to Tyrannosaurus and Other Giant Meat-Eaters (Prehistoric... 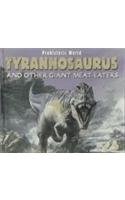 There are many reasons why the prehistoric world captures the imagination of children, but dinosaurs certainly play a major role. It only makes sense, therefore, to open the Prehistoric World series with an investigation of that world's best-known inhabitants -- dinosaurs. Painting a vivid picture of life as we think it then existed, each book features a different type of dinosaur, focusing on a well-known member of a particular group but also discussing its relatives and other similar creatures. Coverage includes the animal's physical characteristics, the world in which it lived, how it lived, and the secrets of its daily survival. An easy-to-read, concise text and full-color, captioned illustrations showing the creatures in action bring the prehistoric world to life for young children.