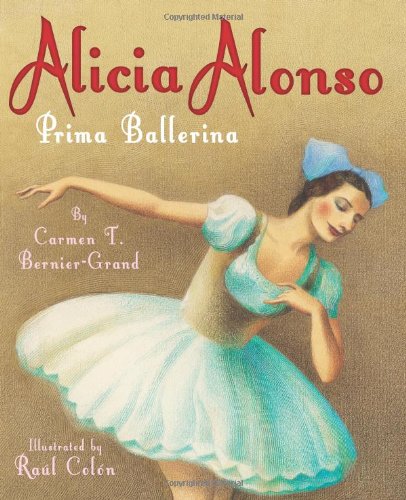 Alicia Alonso’s artistic achievements are remarkable, considering that she became partially blind and lost her peripheral vision at age nineteen. From childhood, she exhibited a passion for dancing, studying first in Cuba and later in New York City, where she became an overnight sensation in Giselle and was promoted to principal dancer in Ballet Theater. Returning to Cuba in 1948, she founded her own company, which eventually folded due to lack of funding. In 1959 the Cuban government gave her enough money to establish a new dance school, Ballet Nacional de Cuba, which Alonso directs to this day. In elegant free verse and stunning artwork rendered in watercolor, colored pencils, and lithograph pencils on watercolor paper, Carmen T. Bernier-Grand and Raúl Colón capture the seminal events in Alonso’s life. The back matter includes a biography, Alonso’s ballets, choreography, and awards, a glossary, sources, notes, and websites.

Author Carmen T. Bernier-Grand grew up in Puerto Rico. She is the author of several children’s books, including Shake It, Morena and Juan Bobo: Four Folktales from Puerto Rico. She lives in Portland, Oregon.

Illustrator Raul Colon lives in New City, New York. He has illustrated more than 30 award-winning picture pictures, including Angela and the Baby Jesus by Frank McCourt.

*STARRED
Ages 10+ Similar in form and concept to many of Bernier-Grand s previous books, this beautiful volume offers a biographical account of ballerina Alicia Alonso through a sequence of free-verse poems, extensive background notes, and large-scale illustrations. Beginning with Alonso s childhood in Cuba, the book relates how she moved to New York in 1937 and overcame partial blindness to dance again, winning worldwide renown. Alonso returned to Cuba in 1948 and founded a ballet company and a school. Though she later left for political reasons, she returned when Castro came to power. Alonso danced until she was 74 and still leads Ballet Nacional de Cuba. ColÃ³n contributes a series of handsome illustrations created with watercolor, colored pencils, and lithograph pencils. The verse skillfully distills a lifetime of events and emotions into images of significant moments. Frequently woven into the text are quotes from Alonso, those who knew her, and published works identified in the appended notes section, which is quite informative. Also included in the back matter are a prose biography, a glossary, and a detailed list of sources, which includes several interviews that the author conducted in Cuba. Well-researched and beautifully designed, this is a suitable celebration of a significant figure in the world of ballet. --Carolyn Phelan, Booklist, September Issue

*STARRED
Ages 10+ Bernier-Grand's (Diego: Bigger than Life) free-verse picture-book biography follows one of 20th-century ballet's most gifted--and steeliest--ballerinas, tracing her climb to the rank of prima ballerina assoluta and her battle to continue dancing as she loses her sight. Spiced with the Spanish of her native Cuba and full of poignant detail (her husband-to-be, seeing her dance, decides on the spot to study ballet so he can be her partner), Bernier-Grand's account does not flinch from Alonso's complex relationship with the Cuban government ("Why do you find killings by Castro/ more acceptable than killings by Batista?" picket signs read), nor from the physical punishment that is the reality of dance ("Dry blood has glued her toe shoes to her feet"). ColÃ³n's (Play Ball!) portraits have the dramatic scale of Depression-era murals; they capture Alonso's grace and celebrate her strength, too. There's little frilliness; Alonso's will to live and to dance seems like a force of nature, and the story, which follows her from childhood through her professional career and into retirement, has the scope of an adult work. --Publishers Weekly, September Issue

Ages 10+ Alicia Alonso is a prima ballerina who left her native Cuba for the United States at the age of 18. Although her English was limited, Alicia found teachers who could help her develop her skills. At age 20, Alicia suffered two detached retinas which in 1941 was a difficult process to correct and she lost the peripheral vision in her right eye. Alicia refused to quit dancing, working with fellow dancers on ways to help her on stage. When Fidel Castro offered to finance a ballet school under Alicia s tutelage, she accepted. Alicia continues teaching, directing, and choreographing works for the Ballet Nacional de Cuba. Alicia s story is told in free verse and Raúl Colón s illustrations capture Alicia s gracefulness and strength. This book is inspiring not only for anyone interested in dance but also for anyone facing physical challenges that could prevent them from achieving their goals. Bibliography. Glossary. Timeline. Websites. Charlotte Decker, Educational Reviewer and Librarian, Cincinnati, Ohio. Recommended. --Library Media Connection, January/February Advanced Reviews