Items related to The Sorcerer's Apprentice: The Life of Franz von...

The Sorcerer's Apprentice: The Life of Franz von Papen 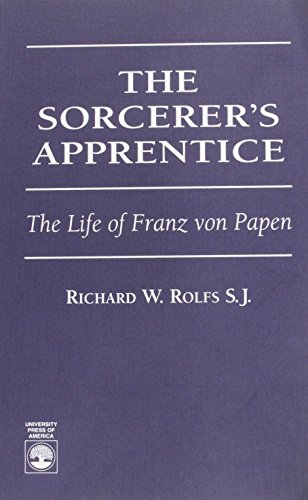 This is the first critical study of a man who helped Hitler into power and continued to serve him until the very end of the Third Reich. Other biographies of Franz von Papen have failed to portray a complete account of his life. This book goes beyond giving a mere profile of Papen's personality; it is a critical examination of his life and the effects that his errors in judgement had upon his world. The author studies how von Papen's exaggerated sense of duty to the "Fatherland" blinded him to the consequences of his service to the Nazis and make it impossible for him to ever fully break his association with the Hitler regime. The Sorcerer's Apprentice, full of pictures and descriptive detail, will appeal to scholars in the field of modern German history. It will also serve as a valuable reference source in any college courses on Nazi Germany and should have a place in every college and university library. In addition, anyone interested in German history from 1944 to 1945 will want a copy of this unique and probing study.
Contents: List of Pictures; Author's Preface; The Early Years; The Kaiser's Faithful Servant; From Epaulets to Top Hat; The Cabinet of Barons; Pinstripe Diplomacy; Towards the "New State"; the "New State" in Action; The "New State" is Challenged; The Cardinal vs. the Baron; Under the Swastika; Revolution After Power; The Austrian Question; The Anschluss; Mission to Ankara; The Final Years; Bibliography; Index.

1. The Sorcerer's Apprentice: The Life of Franz von Papen

Book Description University Press Of America, 1995. Condition: Good. A+ Customer service! Satisfaction Guaranteed! Book is in Used-Good condition. Pages and cover are clean and intact. Used items may not include supplementary materials such as CDs or access codes. May show signs of minor shelf wear and contain limited notes and highlighting. Seller Inventory # 0761801634-2-4