Items related to Defending the Old Dominion: Virginia and Its Militia...

Butler, Stuart L. Defending the Old Dominion: Virginia and Its Militia in the War of 1812

Defending the Old Dominion: Virginia and Its Militia in the War of 1812 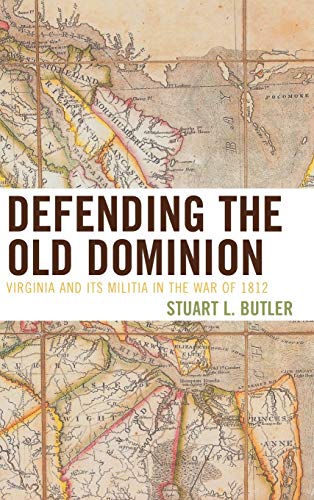 Defending the Old Dominion describes historical events in Virginia during the War of 1812, examining how Virginia’s militia was organized, supplied, and financed by the Commonwealth. The book discusses the militia’s unpreparedness in training, its lack of adequate ordnance and arms, and how that affected its ability to defend the state against British incursions during the war. Political activities of the Virginia legislature and the U.S. Congress are examined with special reference to how the state financed the war and its relationship with the U.S. government. The book includes the fascinating story of nearly two thousand former slaves who fled to British ships to fight in Virginia with British forces.

Stuart L. Butler is the former assistant branch chief of the Military Archives Division, National Archives and Records Administration. He retired in 1999 and currently serves on the Citizens Advisory Council for the Virginia Bicentennial of the American War of 1812 Commission. He attended Florida State University and Florida Atlantic University where he received his B.A. and M.A. in American history. He is the author of the Guide to Virginia Militia Units in the War of 1812 (revised 2011), Real Patriots and Heroic Soldiers: General Joel Leftwich, and The Virginia Brigade in the War of 1812 (2008).

Butler should be complimented for having written what is undoubtedly the most extensive account of Virginia's role in the War of 1812. Those interested in the history of the Old Dominion or in this conflict in general will find something of value here. (Journal of Southern History)

With the bicentennial of the War of 1812 upon us, it is fitting and timely that Stuart Butler has written the most complete history of Virginia during that war. His writing style is clear and easy to read. He not only covers the complexity of the war in Virginia, but he also sets the war in context to the region and the nation. In addition to the battles, skirmishes and raids expected in a book on this subject, Butler takes the reader further into the politics of the war, and the difficulty of adequately supplying the militia and funding it. His experience as a former employee of the National Archives and Records Administration results in a work that is well researched, citied and indexed. Butler has achieved for Virginia what every state with War of 1812 history should strive for. Any scholar of American history will want this book in their library; every library in Virginia should have a copy on its shelves and every citizen of Virginia should read it. (Ralph E. Eshelman, senior author of The War of 1812 in the Chesapeake: A Guide to the Historic Sites in Maryland, Virginia and District of Columbia (Johns Hopkins Press, 2010).)

The War of 1812 was important in Virginia, not only at Fort McHenry, in Washington, D.C., or at New Orleans. Stuart Butler’s important study is the first book-length account of the war in Virginia and on Virginians and the war. Because the national army was so small and ill-prepared, national defense fell onto the shoulders of the state governments. State governors and militiamen carried much of the burden, with serious consequences for the state budget and the people of Virginia. Some became heroes, some died on battlefields, and some like their ancestors fled to the nation’s enemies in hopes of gaining freedom that their own native state denied them. An important addition to the bookshelf of Virginia history. (Brent Tarter, Library of Virginia)

1. Defending the Old Dominion: Virginia and Its Militia in the War of 1812

3. Defending the Old Dominion: Virginia and Its Militia in the War of 1812