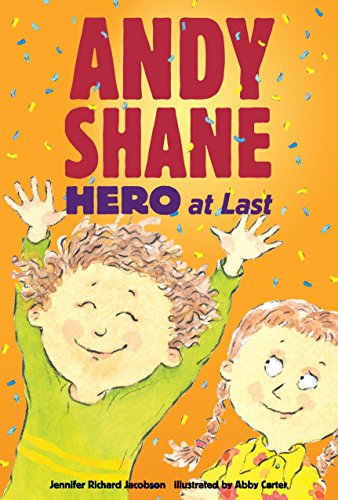 A bicycle-decorating contest provides Andy with a humorous and highly appreciated opportunity to save the hometown parade.

There are two things Andy Shane wants more than anything — to win the contest for best-decorated bike in the parade, and . . . to be a hero. He has a great idea for the bike part, although high-strung Dolores is upping the ante with her paper-daisy-covered helmets for her and her cat. But the second goal has Andy stumped, until the parade is in motion and his eagle eyes catch the reason why the drum corps has suddenly thrown the marchers out of whack. Pass the baton to a lovably low-key hero as he saves the day in an adventure for early chapter-book readers.

Jennifer Richard Jacobson has written numerous books for young readers, including five other books about Andy Shane. She lives in Yarmouth, Maine.

Abby Carter is the illustrator of all the books about Andy Shane, as well as My Hippie Grandmother by Reeve Lindbergh. She lives in Hadlyme, Connecticut.

K-Gr 2-Andy Shane believes that if he can find a four-leaf clover, he will have that little extra bit of luck he needs to win the bike-decorating contest in his town's upcoming parade. When Dolores shows up, he tells her that he wants to find the lucky charm to help him win the contest, but not that he hopes it bring him luck in fulfilling his dream of becoming a hero. As the parade day nears, Andy works hard to prepare his bike. When the day arrives, the boy's nerves set in, especially when he overhears a child misidentify his bike decoration. Out of nowhere, an opportunity to become a hero presents itself and Andy springs into action and saves the parade. Jennifer Richard Jacobson's beginning chapter book (Candlewick, 2010) is read by Rachael Lillis who gives the characters unique voices that match their personalities. Sound effects add to the telling, but in a few instances it is difficult to figure out what they represent. Page-turn signals are optional.-Marci Johnstone, Punahou School, Honolulu, HIα(c) Copyright 2011. Library Journals LLC, a wholly owned subsidiary of Media Source, Inc. No redistribution permitted.