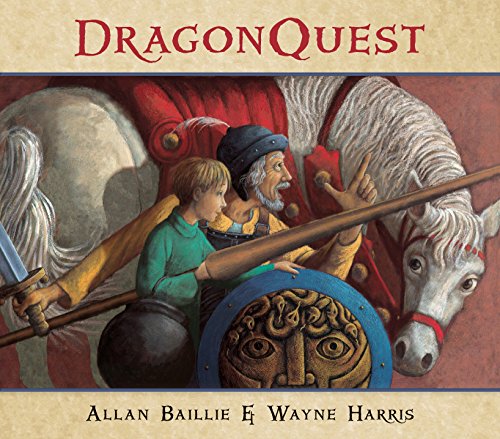 A mission to find the last dragon winds through a perilous landscape, but the knight sees no trace of the creature. Can the eagle-eyed reader spot it?

A noble Dragon Fighter sets out on an expedition to fight the last dragon, inviting the reader along for the journey. Through shifting sands and tangled forests and past the whispering abyss, many awful perils are braved — witches, trolls, werewolves, ghost owls, scorpions, and vultures — but where is the dragon? Whether or not the reader is observant enough to read the subtle clues in the landscape and shadows, the final revelation of the elusive dragon’s whereabouts is sure to produce giggles and gasps of delight. Once in the know, children will want to read this tale over and over, flipping pages back and forth to compare cleverly illustrated details. A tale not to be missed by anyone with the heart of a daring adventurer.

Allan Baillie was born in Scotland but has lived most of his life in Australia, where he attended several Victorian bush schools and eventually settled in Melbourne. He has worked as a journalist and published books in fourteen countries.

Wayne Harris is an award-winning illustrator who also teaches design and illustration. About DragonQuest, he says, “Nothing ever equals the turning of the page to reveal the dragon itself. That one reveal changes everything.”

Gr 1–3—An aging, somewhat comical medieval dragon fighter summons a young boy who is reading DragonQuest to join him in his quest to fight the last dragon. With flowery speech, the old warrior describes the journey to come: "We must pass many perils out there. Awful perils, dangers to set your teeth chattering, to turn your hair white." And at the end of that journey waits "the worst of terrors-green ice gleaming in the [dragon's] eye, claws flashing in the smoky sun, fire curling from its mouth...." The pair travel across deserts, through dark forests, and up steep mountains, all the while managing to escape, outwit, or conquer the dangers from scorpions, snakes, wasps, ghost owls, wolves, goblins, witches, and two-headed trolls. At last, they reach Glass Mountain, the heart of dragon country, and the old warrior is ready to fight. However, after that long, long trek, there seems to be no beast in sight. But then the story takes a humorous twist. The dragon is there all along, hiding in plain sight. Children will enjoy being in on the joke and will appreciate the surprise ending. The not-too-scary goblins, witches, and dragon are rendered in lush, fulsome acrylics and are digitally enhanced. An attractive, easy-to-read addition where there is a demand for picture-book fantasies and adventures.—Roxanne Burg, Orange County Public Library, CA

Book Description Hardcover. Condition: New. Hardcover. Shipping may be from multiple locations in the US or from the UK, depending on stock availability. 40 pages. 0.585. Seller Inventory # 9780763666170