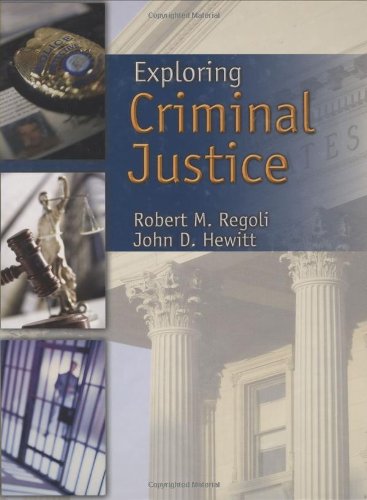 Hailed as the most engaging and accessible introductory text available, Exploring Criminal Justice provides a clear, complete, and credible introduction to the U.S. criminal justice system. Using an easy-to-follow, attention-grabbing writing style, this text explains the overarching processes and purposes of the criminal justice system. The functions of each component police, courts, corrections and the relationships between them are described in detail, while rich and captivating pedagogy encourages students to think about how each component affects their daily lives.

In his lifetime, Robert M. Regoli has found himself in assorted roles relating to criminal justice. In addition to his extensive experience researching and studying police and corrections officers, he also has been a crime victim, secret delinquent, criminal complainant and witness, jury member, and legal consultant. He was born in Antioch, California, earned his B.S. in psychology, M.A. in police science and administration, and Ph.D. in sociology at Washington State University in Pullman. Over the course of his career, he has taught at Indiana State University, Texas Christian University, and, currently, the University of Colorado in Boulder. Dr. Regoli has held several positions at the Academy of Criminal Justice Sciences, including being the President and named a Fellow. He also was former Executive Editor of The Social Science Journal, is the recipient of two William J. Fulbright awards, and is a member of Phi Beta Kappa. He also has been a consultant to local law enforcement agencies, as well as the Colorado Department of Corrections, Indiana Department of Corrections, National Institute of Corrections, and National Institute of Law Enforcement and Criminal Justice. He was also a member of the Indiana Juvenile Justice Task Force and the Task Force for the Children’s Constitutional Rights. Dr. Regoli has written extensively about criminal justice issues for more three decades and has amassed more than 100 professional journal publications and 14 books.