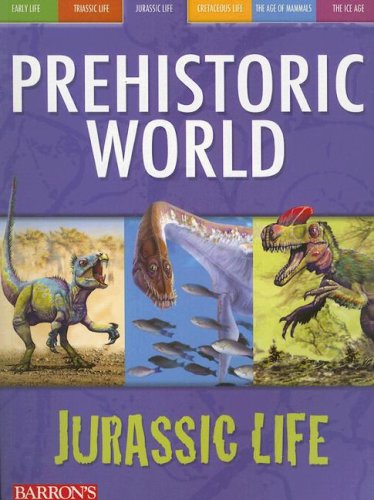 These early dinosaurs inhabited a world that would have been unrecognizable to Tyrannosaurus and other dinosaurs of the Cretaceous era. It existed roughly 206 to 144 million years ago.

Prehistoric World Books combine dramatic, scientifically accurate color illustrations with a wealth of factual details based on archaeological findings to give young readers a vivid picture of the exotic succession of animals that inhabited the Earth in the prehistoric era. Dating back to perhaps 300 million years ago, with the earliest-known life forms, the six titles in this series carry the history of animal life forward to man-like creatures such as homo erectus, and finally to prehistoric homo sapiens, or human beings like ourselves, whose origins date back an estimated 200,000 years. Individual species are presented on two-page spreads that show large illustrations of the animal when it was alive, photos of reconstructed fossil skeletons, and a list of descriptive factual details. These books are great sources for elementary school class projects, or simply for fun reading.

(back cover)
Explore the thrilling world of Jurassic Life animals. Dramatic, scientifically accurate color illustrations plus a wealth of factual details based on archaeological findings will give you a vivid picture of the exotic creatures that inhabited the Earth during the Jurassic Age.