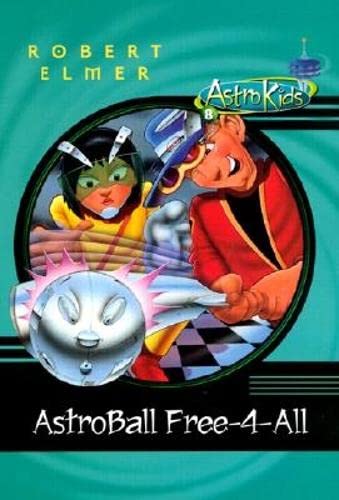 Robert Elmer is a graduate of St. Mary's College and Simpson College in San Francisco. He has written four series for middle-grade readers: ADVENTURES DOWN UNDER, THE YOUNG UNDERGROUND, PROMISE OF ZION, and ASTROKIDS. He got his writing start as a newspaper reporter but has written everything from magazine columns to radio and TV commercials. Now he writes full time from his home in rural northwest Washington state, where he lives with his wife Ronda, and their three busy teenagers.

Take Me Out to the Tryouts

Take me out to the astroball game,

Wire me up to the e-reader hyperport.

Buy me some space nuts and Jupiter-jack,

I don’t care if I never get back.

(with apologies to Jack Norworth)

Okay, okay. Maybe you’ve heard something like it before. But that was the old baseball version back on Earth, way back when. My new song is for astroball, which is what we play up here on CLEO-7. After all, it’s 2175, and ... What’s that?

The floating drone-ump squawked and pointed. He looked kind of like a floating silver watermelon, except for his three extend-o eyes and three arms.

Who wrote that drone-ump’s program? I thought. If that was a hyperstrike, then—

"Wake up, Mir!" My friend Buzz yelled at me from behind the tryout line. "Keep your eye on the ball."

"I am!" I looked back at the silver ball that had just plunked into the catcher’s mitt with a fwuump!

I could have hit it. If I’d wanted to.

"You can do it!" Easy for Buzz to say. He wasn’t staring down the solar system’s fastest pitcher-drone. The drone even had a laser guidance system. DeeBee told me this one was good for throwing balls up to 103 kilometers per hour.

That’s fast, by the way.

"Choke up on the bat!" Buzz yelled.

Come to think of it, my throat did feel kind of tight. In fact ...

I tried to take a couple of deep-space survivor breaths. But they only made my head spin.

Now I was in trouble. Big trouble. I looked around, but everything was a big blur. I could hear the roar of the crowd, like a Saturn 88 rocket lifting off.

Of course, with my luck, I would be left standing right underneath, getting a big-time burn.

Knock it off! I told myself. Don’t let anybody see you choke. It’s only a tryout.

Yeah, only a tryout for the biggest games of my life—the All-CLEO AstroBall Tournament. You know, CLEO-7 against CLEO-5, or CLEO-2 against CLEO-4, and so on. May the best space station win.

This was serious stuff. Sink or swim. Do or die. Honor and glory and prizes.

That’s what I was thinking when I peeked up at the double-sized 3-D hologram of the solar system’s most famous professional astroball coach.

"You ready for another pitch, son?" he asked me.

Now, get this: Coach LaSolar was really in his CLEO-sport office on the moon colony. A 3-D holo-vid projector near the ceiling of the rec-pod made it so he could see and talk to us just like he was really here.

Hold it. Rec-pod? No one has ever said anything about a rec-pod before.

It’s all new! "Rec" stands for recreation, as in games and stuff. And the "pod" is a huge, triple-sized space-gym they hooked up to the outside of the station last month. You should see it: three diamond-shaped playing fields marked off with red and green laser beams, plus a springy floor and a tall ceiling. Four drone-umps float above each field, and there are six replay screens. Very cool!

I wasn’t Tommy LaSolar’s son. He called everybody that, maybe because he was the chief coach for all the CLEO stations.

He looked down his nose at me, squinted, and chewed his big wad of official major league AstroBall Bubblegum.

And he was still waiting for an answer.

"Pitch away." I dug my gripper shoes into the Astroturf and tried not to float away.

"You can do it, Mir!" That was my mom, from the floating bleachers on the sidelines. Ask her if we were playing astroball or basketball or Ping-Pong. I don’t think she’d know the difference.

I wiped the sweat from my forehead with the back of my hand and squeezed the round handle of my flat bat a little more tightly.

Here goes, I thought. I was ready. I had watched my e-reader lesson twenty-two gazillion times—when nobody else was looking. "Astroball in 12 Easy Steps," starring Mister e.

Who is Mister e?

Mister e is the digital instructor on the e-reader. You know, like a cartoon character. He explains things like how to play Martian triple chess, or how to hit a home run in astroball. Any game you want to know, Mister e can demo for you.

I called a quick time out and sneaked a peek at the reader in my pocket one more time. I watched Mister e do the step-by-step replay. Here goes:

"Play ball!" buzzed the drone-ump. I slipped Mister e back into my pocket.

The pitcher-drone wound up one more time.

I counted off the rest of the steps in my head.

Step 06: Impress Coach LaSolar and make the team. (Well, sure!)