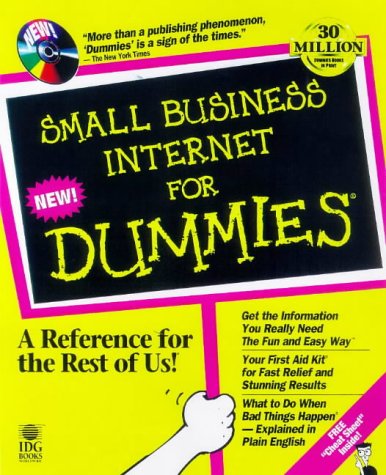 A guide to using the resources of the Internet discusses the benefits of e-mail and real-time conferencing, and using a Web site to improve customer service and conduct market research

There's a mad rush among small businesses to get connected to the Internet, and it's no wonder: an Internet connection means access to Web data, worldwide communications through e-mail, and the ability to put pages online to advertise goods and services. It's also a lot easier to make your little company look big and established on the Internet than it is in real life. This book is an introductory Internet text that explains the wired world in the language of small-business owners.

The author begins by explaining what the Internet is about, cutting through the hype and detailing what one can reasonably expect to happen as a result of getting connected. He then goes into the options small businesses have in terms of connection. Is a dial-up connection with a modem adequate, or would a dedicated line be more cost-effective? He explores many options, detailing the capabilities and expenses of each. In addition to modems and ISDN, this book explains frame relay and ATM technology--stuff that's on the far end of possible for tiny businesses but within sight for slightly larger organizations.

A large chunk of this book has to do with using the Internet. You'll find chapters on Web surfing and FTP as well as on newsgroups and chat rooms. Sadly, the chapter on e-commerce is too cursory to be of much use to anyone wanting to set up an online store, though the general advice it offers is sound. Security coverage is similarly broad. A companion CD-ROM contains an e-mail server program and some freebie demos, including Paint Shop Pro. --David Wall

Greg Holden is founder and president of a small business called Stylus Media, which is a group of editorial, design, and computer professionals who produce both print and electronic publications. The company gets its name from a recording stylus, that reads the traces left on a disk by voices or instruments and translates those signals into electronic data that can be amplified and enjoyed by many.

One of the ways Greg enjoys communicating is through explaining technical subjects in nontechnical language by writing computer books, which help other people use the Web to share their own personal and professional interests. Starting an Online Business For Dummies® is his ninth book. Recently, Greg also coordinated a chat event on the Internet, prepared content for a CD-ROM tutorial that shows small business owners how to create their own Web sites, and helped produce technical manuals on Java and Lotus Notes.

Greg balances his technical expertise and his entrepreneurial experience with his love of literature. He received a M.A. in English from the University of Illinois at Chicago, but that only gave him an official credential for what he had been doing since he was a tiny tot. As a preschooler, barely big enough to hold the book, he was displayed by his proud but rather puzzled parents as the kid who read from the encyclopedia to impress his relatives at family gatherings. You can read about some of his past and present triumphs and traumas in the poetry and short stories that he scribbles down at odd moments.

After graduating from college, Greg became a reporter for his hometown newspaper, first covering sewers and school boards and then working his way up to having his own column (called "So It Goes"), in which he voiced his perspective on the world. Working at the publications office at the University of Chicago was his next job, and it was there that he started to use computers. He discovered, as the technology became available, that he loved desktop publishing (with the Macintosh and LaserWriter and, later on, the World Wide Web).

Greg loves to travel, but since his two daughters were born, he hasn't been able to get around much. However, through the Web, he enjoys traveling vicariously and meeting people online. He lives with his family in an old house in Chicago that he has been rehabbing for -- well, for many years now. He is a collector of objects such as pens, cameras, radios, and hats. He is always looking for things to take apart so that he can see how they work and fix them up. Many of the same skills prove useful in creating and maintaining Web pages. Greg is an active member of Jewel Heart, a Tibetan Buddhist meditation and study group based in Ann Arbor, Michigan.