Items related to Microsoft Windows Me For Dummies (For Dummies Series) 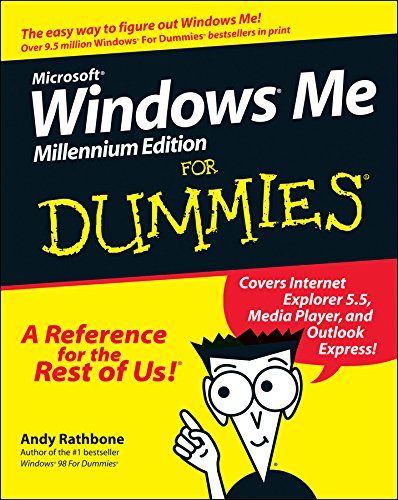 Microsoft Windows Me For Dummies boils down to this simple fact: Some people want to be Windows wizards. They sit in front of their computers randomly pressing keys, hoping to stumble onto a hidden, undocumented feature. And you? Well, you’re no dummy, that’s for sure. But when it comes to Windows and computers, the fascination just isn’t there. You just want to get your work done, feed the cat, and relax for a while. And there’s nothing wrong with that.

That’s where this book comes in. Instead of becoming a Windows Me expert, you’ll know just enough to get by quickly, cleanly, and with a minimum of pain so that you can move on to the more pleasant things in life.

Don’t try to read this book in one sitting. Instead, treat it like a dictionary or an encyclopedia. Turn to the page with the information you need, then put down the book and move on. Don’t bother trying to remember all the Windows Me buzzwords, leave that stuff for the computer gurus. In fact, if anything technical comes up in a chapter, a road sign warns you well in advance. That way, you can either slow down to read it or speed on around it.

You won’t find any fancy computer jargon in Microsoft Windows Me For Dummies. Instead, you’ll find subjects like these, discussed in plain old English:

In Microsoft Windows Me For Dummies, there’s nothing to memorize and nothing to learn. Just turn to the right page, read the brief explanation, and get back to work. Unlike other books, this one enables you to bypass the technical hoopla and still get your work done.

Microsoft Windows Me has a lot to offer someone who wants to use Windows in a home or small-office setting. Author Andy Rathbone competently explains its advantages (as well as some of its shortcomings) in Microsoft Windows Me for Dummies, a fine example of software documentation that appeals to novices without shirking its responsibility to include lots of details. To his credit, Rathbone knows that what's interesting to the Microsoft marketing department isn't necessarily important to most users of Windows Me. That's why he's gone to some trouble to include instructions for such unglamorous but important tasks as duplicating floppy disks and copying text from place to place in a document.

About half of this book deals with absolutely fundamental Windows subjects, such as running programs by choosing them from the Start menu, and moving files around. Rathbone deals with this material ably, although with far fewer illustrations than some readers might want. More exotic material--such as using two video monitors at once, and the essentials of e-mail and the Web--also gets attention. However, Rathbone totally neglects what might be the most exciting new feature of Windows Me--the Home Networking Wizard. Instead, he (or, probably more to the point, his publisher) chose to relegate the Home Networking Wizard to More Windows Me for Dummies, which is a cheap ploy to sell more books. If you're new to Windows and getting started with Windows Me, however, this book has what you need. --David Wall

Topics covered: The fundamentals of Windows Me, including program launching, file management, hardware essentials, customization of the look and feel of Windows Me, and the little programs that ship with the operating system. There's also coverage of the Internet; specifically, of Internet Explorer 5.5 and Outlook Express.

Praise for the #1 Bestseller* Windows 98 For Dummies "This book feels your pain and prescribes a chuckle." — G. David Wallace, Business Week "Informative, friendly, conversational, and slightly irreverent.... It could help save you time and ease your frustration level." — Suzanne A. Smith, San Diego Union-Tribune "Written in a humorous style that gets the job done." — Don Crabb, Chicago Sun-Times *Publishers Weekly (Computer Bestsellers, Operating Systems)

Keep Windows under control! Windows Me controls your computer. But how do you control Windows Me? Don't worry! With bestselling computer-book author Andy Rathbone at your side, you'll figure out how to tame those buttons and boxes, install software or a peripheral, connect to the Internet, and take advantage of those cool multimedia features.

Discover how to: Handle Windows Me basics Have fun with audio, video, and images Connect to the Internet Personalize your PC Give your system a tune-up Deal with common aggravations

Get smart! www.dummies.com Register to win cool prizes Browse exclusive articles and excerpts Get a free Dummies Daily e-mail newsletter Chat with authors and preview other books Talk to us, ask questions, get answers

1. Microsoft Windows Me for Dummies

2. Microsoft Windows Me For Dummies (For Dummies Series) Rathbone, Andy