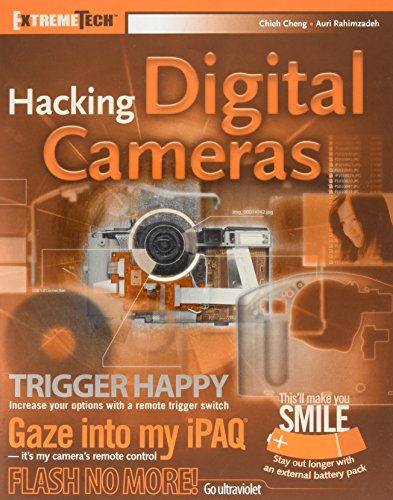 Why waste a thousand words?

Photos tell stories. And the more you can do with your digital camera, the better the story you can tell. So build a remote control and sneak up on that picture that keeps eluding you. Create an adapter that lets you use SLR-type lenses on your point-and-shoot. Play with lens magnification or create a pinhole lens. Beef up flash memory. And that's just where the tale begins. The ending is up to you.

Illustrated step-by-step directions for more than 20 hacks, including:

Chieh Cheng has a Computer Science degree and is currently a Senior Software Engineer developing radiation medicine control systems for cancer treatment. He is an avid photographer who has won photo contests and had pictures published in magazines. Hacking cameras is one of his many long-term hobbies. He created and has maintained the Camera Hacker web site (www.CameraHacker.com) since its inception in 1998. The web site includes forums and articles on camera hacking projects, practical photography tips, and photographic equipment reviews.

Auri Rahimzadeh has been tinkering with computers ever since he was six years old and loves all technology. Auri collects computers and has been involved with many computer projects, including teaching computers alongside Steve Wozniak, co-founder of Apple Computer. Auri is the author of the book Geek My Ride, also published by Wiley in their ExtremeTech series. He has written hundreds of articles on various computer technologies, and has contributed to many standards, including HDTV, DVD, and interactive television. Auri contributes to computer education for students across the country and has promoted technology awareness through the Indianapolis Computer Society, where he has served as president for three years. Currently, Auri runs his own IT consulting firm, The Auri Group (TAG), and spends his free time programming, chatting in Starbucks, and going to Pacers games (Go Pacers!).

"Each project is meticulously described...I have to take my hat off to the authors for their ingenuity." (Northern Echo, August 2006)