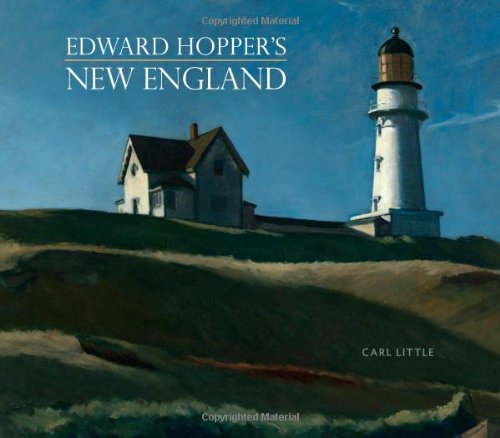 Edward Hopper, one of the most important American painters of the twentieth century, spent nearly every summer of his prolific career in New England—a region with coastal views, mansardroofed houses, and a still light that served as the inspiration of many of Hopper's greatest works. This comprehensive collection presents some of Hopper's finest paintings of New England, providing a guide to the places that resonated so deeply with the artist throughout his career.

Carl Little's essay examines the crucial role New England played in Hopper's development and considers the full range of his work devoted to this subject: early etchings and radiant watercolors; architectural paintings of Victorian mansions, factories, barns, and summer cottages; and magnificent sailing pictures through which Hopper expressed his lifelong love of the sea. Also included are late-career psychological paintings—composites of the landscape with figures—which convey the loneliness and isolation for which Hopper's work is best known.

On the coast of Maine, along the shore of Cape Ann, among the hills of Vermont and the bluffs of Cape Cod, Edward Hopper found the New England landscape to suit his sensibility. Edward Hopper's New England explores the artist's profound relationship with the region, from his scenes of Gloucester's sail-filled harbors and sunlit streets to his monumental lighthouse paintings, which have become icons of American art.

Back in print, this second, revised edition of the classic best-seller offers an updated, fresh design. Includes selected bibliography.

About the Author:
CARL LITTLE is the author of many books, including Winslow Homer and the Sea (Pomegranate). He is a regular contributor to art magazines and has contributed essays to a number of museum and gallery exhibition catalogues. Formerly the director of the Blum Gallery at the College of the Atlantic, Little lives with his family in Somesville, Maine.
From Library Journal:
Hopper (1882-1967) is best-known for his portrayals of nocturnal loneliness in an urban setting. His landscapes and seascapes, inspired by summers spent in coastal Maine, Glouster, Cape Cod, and the hills of Vermont, share a similar sense of desolation and stillness. Little draws from the many standard studies, then adds his own personal criticisms, to develop the 12-page essay that accompanies the 35 color plates in this slim, handsomely designed picture book. Additional black-and-white illustrations are tucked into the margins of the essay. This will be of interest mainly to general readers with a love of the region.
- Kathleen Eagen Johnson, Historic Hudson Valley, Tarrytown, N.Y.
Copyright 1993 Reed Business Information, Inc.