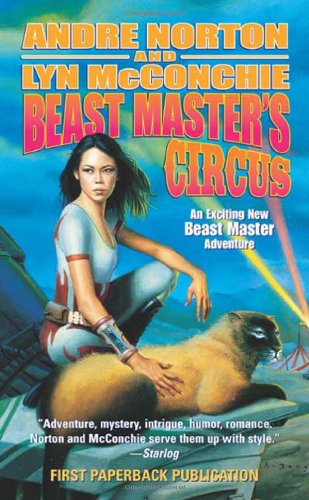 Since the dreaded Xik destroyed Earth, the corps of Beast Masters and the animal teams with which they have telepathic rapport have served as sentinels against the Xik and other threats to colony worlds throughout the galaxy.
Now a conspiracy with ties to the Thieves Guild is trying to kidnap the Beast Masters' team animals. On one world after another, they are attacking Beast Masters and targeting their animals, leaving a trail of dead or wounded Beast Masters and their animals in their wake. They haven't yet succeeded in capturing one alive . . . but they are still trying, and they're becoming more desperate---and bolder.
Laris is a young woman who works for a spacefaring circus, a bonded slave to its manager. An orphan with a troubled past, Laris is gifted with animals, a valuable asset to the circus and to her boss. But she's learned that somehow there's a connection between him and the Thieves Guild, and also the attempted abductions of Beast Masters' animals. She also knows that if her boss finds out what she has discovered, it would make her a problem, and he usually disposes of problems.
When the circus lands on Arzor, home to Beast Masters Hosteen and Tani Storm, Laris feels a kinship to them and to Hosteen's family, the Quades. She realizes, however, that she may be endangering them by exposing them to the dark interest of her boss and his ill-intentioned friends. Hosteen and Tani like Laris, too, as does Logan Quade. She would give anything to tell them her dangerous secret, but cannot. Because she knows that her friendship with the Beast Masters could be their downfall, as well as her own!

For well over a half century, Andre Norton has been one of the most popular science fiction and fantasy authors in the world. Since her first SF novels were published in the 1940s, her adventure SF has enthralled readers young and old. With series such as Time Traders, Solar Queen, Forerunner, Beast Master, Crosstime, and Janus, as well as many stand-alone novels, her tales of action and adventure throughout the galaxy have drawn countless readers to science fiction.

Her fantasy, including the best-selling Witch World series, her "Magic" series, and many other unrelated novels, has been popular with readers for decades. Lauded as a Grand Master by the Science Fiction Writers of America, she is the recipient of a Life Achievement Award from the World Fantasy Convention. Not only have her books been enormously popular; she also has inspired several generations of SF and fantasy writers, especially many talented women writers who have followed in her footsteps. In the past two decades she has worked with other writers on a number of novels. Most notable among these are collaborations with Mercedes Lackey, the Halfblood Chronicles, as well as collaborations with A.C. Crispin (in the Witch World series) and Sherwood Smith (in the Time Traders and Solar Queen series). An Ohio native, Ms. Norton lived for a number of years in Winter Park, Florida, and now makes her home in Murfreesboro, Tennessee, where she continues to write, and presides over High Hallack, a writers' resource and retreat.

Lyn McConchie has been collaborating successfully with Andre Norton since the early 1990s, first via mail and more recently via e-mail, bridging the equator and most of the Earth's oceans to write rousing SF adventures together. Ms. McConchie lives in New Zealand.

Telepathic beasts and the efforts of Laris, a young animal trainer, to escape her bondage to Dedran, a greedy Circus Master, add intrigue to this latest installment of Norton and McConchie's Beast Master series (Beast Master's Arc, etc.). Laris, an orphan and hardworking refugee, loves the creatures she cares for as much as she hates Dedran, who "owns" her until she can earn enough credits to buy her freedom. Fortunately, on the space-traveling freighter The Queen of the Circus and during its stops on various planets, she develops a special telepathic bond with Prauo, a big alien cat who joins her, along with Cregar, another unhappy circus employee, in trying to thwart Dedran's nefarious plan to assist fellow Thieves Guild Members in stealing and cloning gifted beasts. This big top of the future includes illegally obtained "tigerbats" and rare Terran dogs, as well as two colorful crooks, Ideena and Baris, who manage to infuse the somewhat stale plot with much-needed humor. The hints regarding Laris's true identity may be a bit too obvious for more clever readers, while older SF/fantasy fans will likely find the story too tame. Still, animal-loving young adults should be well satisfied.
Copyright © Reed Business Information, a division of Reed Elsevier Inc. All rights reserved.