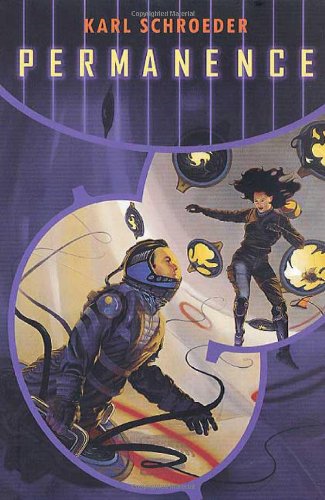 Young Rue Cassels of the Cycler Compact -- a civilization based around remote brown dwarf stars -- is running for her life from her bullying brother, Jentry, who has stolen her family inheritance and threatens to sell her into slavery. Fleeing in a shuttle spacecraft from the sparsely populated and austere comet-mining habitat she has lived in her whole life, she spots a distant, approaching object, and stakes a legal claim to it. It is not the valuable comet she hoped for but something even more wonderful, an abandoned Cycler starship.

Since the discovery of a faster-than-light drive, unfortunately operable only between larger stars, the Cycler Compact civilization has gradually dwindled. It's much cheaper for the star-based civilizations of the new Rights Economy to bypass the stops that can't be made with the new technology, and the civilizations of the brown stars are gradually sinking into anarchy and chaos. It has been decades since the last Cycler ship passed anywhere near the system in which Rue grew up. Her discovery unleashes a fury of action, greed, and interstellar intrigue as many factions attempt to take advantage of the last great opportunity to revitalize-and perhaps control--the Compact.

This is the story of Rue's quest to visit and claim this ship and its treasures, set against a background of warring empires, strange alien artifacts, and fantastic science. It is a story of hope and danger, of a strange and compelling religion, Permanence, unique to this star-faring age, and of the rebirth of life and belief in a place at the edge of forever.